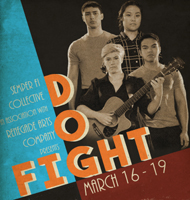 Crossing the Pacific Theatre’s tiny stage floor to reach my seat a few minutes before curtain was like passing through the beginning of a good party, or the end of a bad one. As the socializing continued past the scheduled curtain time, I wondered how this young bunch of actors and musicians would be able to focus on their respective tasks. I need not have worried. From the moment the show began, the talented ensemble cast immediately applied the intensity that this musical drama required.

This Semper Fi Collective production (in association with Renegade Arts Company) is, at least in terms of the narrative arc, generally faithful to Nancy Savoca's 1991 film of the same name. It’s probable that not many people in the audience had even heard of the film version. Stuck between being an anti-Vietnam war essay and a romantic drama, the film’s producers were likely never able to decide on its target market.

Peter Duchan and Benj Pasek’s unlikely musical adaptation of a quirky period drama is set in San Francisco at the height of the Vietnam War in the early sixties. Half dozen macho Marines fresh out of basic training concoct an odious, not to mention cruel, contest. The Marines, about to start their first tour of duty in Vietnam throw fifty bucks in a kitty with the winner taking the prize for the ugliest date he brings to the party.

The thought-provoking story set to an original music score centres on an all too brief relationship between Eddie Birdlace (Stuart Barkley) and Rose, a plain, naïve waitress and occasional folk singer (remember, this is the 60s). Birdlace persuades the girl to go to a party with him, but she doesn’t know that she’s his “ugly” date. Of course, Rose isn’t really ugly and Amanda Sum who plays her character – certainly isn’t. The young (and immature) Marine becomes conflicted about subjecting Rose to the contest and tries to wiggle out. Predictably Rose discovers the truth about Birdlace’s callous plan and feels humiliated.

Stuart Barkley who alternates the role of Birdlace with Justin Lapena, does a phenomenal job. He delivers strong vocals in his solos and group singing performances. He is just as affecting in his robust portrayal of the brash soldier and then drawing out the nuances of a combat weary vet in the final scene.

Amanda Sum, although having a reasonably pleasant singing voice, offers a performance that is too light for the play’s moral compass. Nonetheless, her duet with Jess Amy Shead in the title song "Dogfight" is laden with poignancy.

The show is at its best when the cast comes together with energetic ensemble performances in "Some Kinda Time" and "Hey, Good-Lookin” – the show’s most vital tunes. Musical director Peter Abando successfully leads a strong six-piece band, handling the show’s challenging score.

This musical premiered in Vancouver last year with Awkward stage productions as part of a seed project,  It swept the local Ovation awards for Vancouver  Musical Theatre taking home  5 awards including Best Director (Chris Lam), Best community production (small), and  a tie for both its male and female leads. cast comes together with energetic ensemble performances in "Some Kinda Time" and "Hey, Good-Lookin” .

Lam is producing the show again as  a Semper Fi Collective production in association with Renagade Arts Company with a mostly new cast, new design/ creative team and in a completely new space.  In this version, he's double cast the roles of "Eddie Birdlace" and "Rose" played on alternating nights by Stuart Barkley, Amanda Sum, Justin Lapena and Sara Vickruck.

The show has virtually no set,  simple costumes and a smaller playing space, but it absolutely works.  In Wednesday night's opening, we see  emerging artist Stuart Barkley take on the role of "Eddie" with subtle insecurity, moments of  bravado and a powerful singing voice complimented by newcomer Amanda Sum's  quirkiness, beautiful folksy voice  and an unexpected heart wrenching grasp of the material

.Jess Amy Shead does an admirable job as the comically tragic "Marcy" boasting one of the biggest voices of the night. I should also mention Sabrina Prada and Sharon Crandell Ong who tackle multiple characters with ease.

The band led by Peter Abando is full and rich but unfortunately overpowers the singers in some numbers balancing their performance playing to both the north and south side of the venue.  Carolyn Rapanos' eye catching colourful stools make up all the set pieces and Jonathan Kim creates visually stunning lighting.

The space itself was well used through musical staging created by Lam and Montomery (also serving as dance captain) and likewise, the cast in a collaborative effort. Lam goes on to create some briliant moments and stage pictures. My one personal gripe is that the mime was unspecific. I wasn't sure what the cast was supposed to be holding,  or whether the object magically changed shape and size.