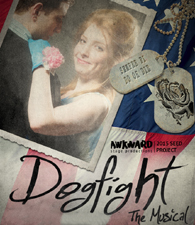 'I've reviewed musicals by Awkward Productions at the Fringe, and they've been very good. This 2011 award-winning musical was well directed by Chris Lam and performed superbly by a cast led by Katie Purych (Rose) and 2015 Ovation awardee Riley Qualtieri (Eddie).

Personally, this musical strikes a chord. Friends of mine who had gone to fight in Vietnam either never came back or if they did, returned disabled. One friend came back with a shattered leg, and another, with a bullet in his skull. They've never been the same after that.

Pasek and Paul based this Musical on the 1991 movie starring River Phoenix, and it premiered Off-Broadway in 2012. It's about three Marines setting out for one final boys' night of partying on the eve of their deployment to Vietnam.

Kudos to all the performers who danced and sang extremely well, accompanied by a band of four led by pianist Clare Wyatt. I liked the scene design-- a thrust stage with the audience on three sides, and aisles where the actors would perform and enter/exit.

.Congratulations to Producer Lisa Goebel and the production team for coming up with this fine 'seed' project aimed at developing the craft and skills of emerging artists here in Vancouver.