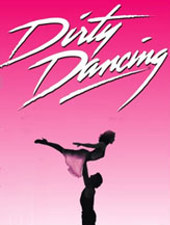 Broadway Across Canada
Dirty Dancing – The Classic Story On Stage

Dirty Dancing - The Classic Story on Stage is the stage adaptation of the iconic 1987 film of the same name (minus the tagline) that gets its easy-to-follow storyline from Eleanor Bergstein's nostalgic autobiographical account of her own experience of a family vacation at a holiday resort in the Catskill Mountains during the summer of 1963. Probably because this stage production is authored by the same writer, it stays essentially faithful to the film version – perhaps a little too faithful, even borrowing much of the film’s dialogue.

I don’t remember the film version being quite so political. Director James Powell has shoe-horned in a whole section on the Civil Rights, that aside from presenting an opportunity for an excellent ensemble performance of “We Shall Overcome," it does little to advance the story.

It’s a kind of coming-of-age story centred around 17 year old Frances Houseman, known to her family and friends as ‘Baby’ and a resort dance instructor Johnny Castle, simply known as Johnny. Baby is a sheltered, idealistic Jewish kid and Johnny is a blue-collar guy who teaches Baby more than just a few dance moves.

Dirty Dancing is not so much a musical in the real sense. Sure there is lots of music – roughly forty-plus, sixties period tunes played as a soundtrack. What live music there is though is played by an onstage band and sung by ensemble performers Adrienne Walker and Doug Carpenter.

Walker and Carpenter acquit themselves well, particularly with Walker’s solo rendition of “This Magic Moment” that opens the show and Carpenter’s inspirational “In the Still of the Night” half way through the second act. Unfortunately, the blend of live music and ‘canned’ music was not accurately mixed in terms of volume or pitch.

But Dirty Dancing is all about… well, the dancing – dirty or just plain raunchy. Principal performers Christopher Tierney and Gillian Abbott articulate Michelle Lynch's choreography with incredible verve. Tierney in particular, despite his acting shortcomings, has a dazzling stage presence. Cirque du Soleil alumna Abbott fearlessly takes on the Jennifer Grey role and makes it her own. Surely for a dancer, it has to be more difficult working in choreographed errors than doing it right. San Francisco native and former ballerina Jenny Winton as Penny Johnson lights up the stage with a seductive display of sensuous physicality.

Production values are again of the high quality that audiences have come to expect of tour shows. Tim Mitchell’s intelligent lighting design and Jennifer Irwin’s period accurate clothing are definitely top drawer. However, Jon Driscoll’s hologram backdrops failed to impress, although the sight of Johnny and Baby practicing in the lake without getting their hair wet drew some chuckles from the audience.

Dirty Dancing is successful by virtue of its exuberant cast, who just might be the fittest and foxiest group to be seen on a Vancouver stage in a long time.