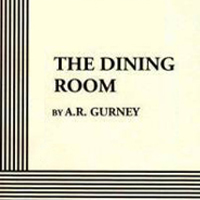 Western Gold Theatre
The Dining Room by A. R. Gurney

A half dozen actors (Anna Hagan, Alen Dominguez, Keith Martin Gordey, Kate Dion Richard, John Prowse and Adele Noronha) share forty-plus roles – some with names, others without – in A.J. Gurney's comedy, The Dining Room. Set in a single room, Gurney's play is episodical rather than having a linear narrative, comprising of period piece vignettes and a collection of SNL style comedy sketches.

The audience is kept on its toes with scenes overlapping each other, as characters from one scene share ‘the table’ with characters in the following scene. It’s probably a nightmare for stage manager Anthony Liam Kearns, but director Chelsea Haberlin manages to keep the action moving at an even pace and creating a seamless scene-to-scene flow.

In the first scene six strangers are cursorily examining exhibits in a museum. Then, they stop to gaze upon an elegant rounded-rectangular dining table and six cushioned wooden chairs cordoned off to prevent access. Subsequent scenes follow in swift succession, featuring two, three, four actors or occasionally the entire cast.

A versatile cast play characters ranging in age from supercharged school-kids to seniors suffering from dementia. The scenes (and there are a lot of them) are not necessarily performed in chronological order but span a period from when the furniture was built (around 1900) to when the play was written (1980s).

It’s essentially an ensemble piece, with the six actors roughly sharing the load. The creative stunt casting doesn’t always work. Younger cast members have to take on cross generation roles, and then tend to over-reach their character foibles. An exception is John Prowse’s illustration of a father who lauds over his son and daughter like a sergeant-major, yet is convincing as a fretful child, infatuated with the household’s female servant, and even pulls off the necessary droll factor when discussing his own funeral arrangement with his son.

One of the funniest scenes had Sarah and Helen, a pair of college girls (Kate Dion Richard and Adele Noronha) sitting at the dining table getting soused imbibing their parents liquor.

The Dining Room is Gurney's satire on the WASP culture and excessive lifestyle, which he considered to be in the decline in the eighties. Perhaps in the present time, it might be adapted to satirize the so-called “one percent.”