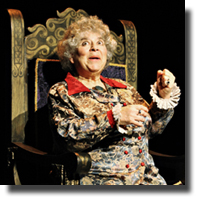 If I were to compile a list of fictional characters that I would like to meet, Pomona Sprout, the herbology teacher at Hogwarts would be in the top five. I realise that I’m only going to see Pomona again if I watch Harry Potter and the Chamber of Secrets or Harry Potter and the Deathly Hallows. This week however, I managed the next best thing; albeit, in an entirely different context.

Septuagenarian actor Miriam Margolyes, who plays Pomona Sprout in the Potter films, has brought her one-woman show Dickens’ Women to the Vancouver East Cultural Centre (affectionately known by locals as The Cultch). Over 120-minutes, Margolyes takes her audience back to mid nineteenth century England with close to a couple of dozen character portraits of some of Charles Dickens most colourful characters; in addition to dramatic readings from Dickens’s works and sundry anecdotes about the man himself.

Ms Margolyes is doubtlessly well qualified to embark upon such a venture. Not only is she an enthusiastic student of the writings of England’s favourite storyteller, she portrayed the author’s wife Catherine Dickens in the BBC television biography "Dickens" (later shown on PBS).

The distinguished actor enjoys a rather ambiguous relationship with her favourite writer. While she concedes to having enormous admiration for his story-telling genius, she unequivocally acknowledges his tenebrous side. “He’s not the jolly, jocund gentleman that we’ve been expected to believe” she informs the audience.

It seems Charley had a fascination, bordering on obsession, for seventeen-year-old girls, whom Margolyes describes as “mini-breasted child love objects.” A predilection matched by a certain repugnance for women who passed a certain age and dared to show it.

Ms Margolyes is at her definitive best when shifting seamlessly between character vignettes. The first of which, as she bounds onto the stage, is the outwardly grotesque Sarah Gamp from Martin Chuzzlewit. Her reading of Dickens’ original text with a significantly slurred cockney accent is ludicrously droll.

Margolyes shows her astonishing versatility for characterisation never more than with a delightful bit of satire in a hilarious conversation between the sly Mr Bumble and the coquettish Mrs Corney in an excerpt from Oliver Twist.

Anyone who has read much of Dickens’ classic stories will be familiar with his skill at creating society’s outsiders. Margolyes manages to bring to life with empathy and deferent expression, such characters as Miss Mowcher, the dwarf manicurist from David Copperfield and Miss Wade from Little Dorrit, the lesbian who discovers her sexuality at age twelve.

Like many actors of her generation, Ms Margolyes has no need for microphones. She is easily capable of projecting her amazing voice, without shouting, to every corner of the theatre.