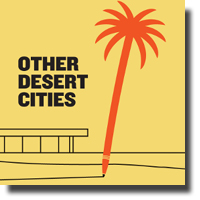 Jon Robin Baitz’s curiously titled drawing room drama with a modern twist assembles four members of the Wyeth family plus one in-law in a Palm Springs style Christmas get-together. The play’s title, as explained in the programme is taken from a signpost on Interstate 10 directing traffic to “Other Desert Cities” before reaching Los Angeles.

It’s Christmas Eve at Lyman and Polly Wyeth’s home, but you would hardly know it, save for the tinsel covered artificial Christmas tree. Siblings Brooke and Tripp are home for the holidays, Tripp from Los Angeles and older sister Brooke from New York. Polly’s sister Silda, drying-out from a stint in rehab, is temporarily residing with the elder Wyeths.

Lyman and Polly are steadfast Republicans. In today’s world (the play is set in 2004), they could easily be aligned with the Tea Party. Brooke has pretty much jettisoned her parent’s political views in favour of recently adopted liberalism. Brooke is about to stretch the family’s fragile Christmas goodwill to breaking point. She has written a soon to be published book that explains her older brother’s suicide and her parent’s involvement in it – therapeutic for her, but a potential nightmare for Lyman and Polly.

Gabrielle Rose as the ultra conservative matriarch gets all the best lines, though perhaps it’s her pinpoint delivery with such sardonic observations as “They’re too old, the Brits, even the children” that makes them seem like the best lines.

Arts Club regular Allan Gray offers a pitch-perfect reading of former actor and Reaganite Lyman Wyeth. Gwynyth Walsh completely seizes the audience’s attention as the caviling Silda Grauman, who might just be the play’s most grounded character. I had the most difficulty accepting Anna Galvin as the neurotic Brooke. Granted, it’s arguably the most difficult role, but rarely does she evoke empathy and her rightful anger often comes across as a bad attitude.

Benjamin Elliott gives a carefully modulated performance as younger brother Tripp who provides an effective buffer between Brooke and their parents. Elliott also assumes responsibility of the production’s sound consultant, which supposedly involved integrating the jazz version of “God Only Knows” at the beginning, during and at the end of the performance.

Other Desert Cities could perhaps be considered a cautionary tale – of sorts. We might learn, along with Brooke that honesty and truth are not necessarily synonymous.