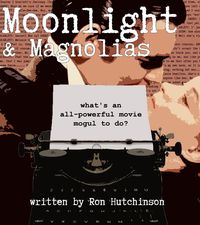 Moonlight and Magnolias by Ron Hutchinson

The last play competing in the Greater Vancouver area is this comedy by Irish playwright Ron Hutchinson about a fictionalized version of what might have happened in the preparation of Gone with the Wind. Producer David O. Selznick (Fred Partridge) locks himself in his office for five days with screenwriter Ben Hecht (Paul Ferancik) and Wizard of Oz director Victor Fleming (Ryan J. Johnson) and write the script for this Margaret Mitchell saga. We all know the many Academy awards this film raked in.

I've reviewed many shows directed by Ryan Mooney, and although he's at his best with musicals, his comedies are also well-done. As an actor, he is quite good in comedies. I remember seeing him act in Lend Me a Tenor and he was quite good.

The pacing of this play was excellent, and the actors vibed with each other quite well. This isn't the kind of comedy where you roll in the aisles in laughter. It does have slapstick moments when they start throwing peanuts at each other. Neither do you see the Neil Simon kind of jokes that are witty and Newyorkish, but the playwright does shed some light on what might really have happened during those five days.

Whether this play will be chosen to represent the Greater Vancouver Zone in this summer's mainstage in Kamloops will be decided tomorrow, Saturday. If this play is chosen, that'll be two in a row for White Rock Players. 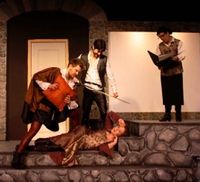 Canadian playwright Anne Marie MacDonald won the 1990 Governor General Award for drama for this comedy which I found quite amusing. The main character, Constance Ledbelly (Karryn Ransom) is transported into the Bard's world of Othello and Romeo and Juliet and sends his stories in comedic directions. Her intervention converts the Bard's tragedies into comedies.

Ransom did a great job playing the spinsterish academic, while all the other cast members did quite well playing multiple roles. My only peeve was the lack of fluidity in changing scenes. A lot of time could have been saved if the scene changes were done quicker and more effectively. There was also a delay in starting the production because of technical problems, but this couldn't be helped and it was only a 15-minute delay.

This was the first of five plays competing to represent the Greater Vancouver Zone, and the winner will go to the Main Stage in Kamloops to vie with other Theatre BC zones.