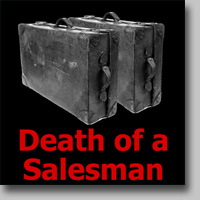 Fred Partridege (Willy Loman) is no Fredric March or Dustin Hoffman, great actors who portrayed this role. But he delivered well and for community theatre, that is something. It's a difficult role but his acting was more than satisfactory.

Directed by Ryan Mooney, Death of a Salesman, a Tony award­winning play is considered one of the best modern American plays – the tragic story of a salesman, his dreams, and the community around him. The pursuit of the American Dream, and just like here in Canada, Miller already prophesied that the American or Canadian dream is only for the few lucky ones. For the ordinary citizen, we have to be happy with what we have, and not try to pursue a dream that never comes.

The other actors who delivered quite well were Jane Mantle (Linda), Willy's wife; Tom Gage (Biff) and Edwin Perez (Happy), their sons. The set and costumes were quite good--reflecting the period in the mid 1900s.

Kudos to the White Rock Playes for another successful production.