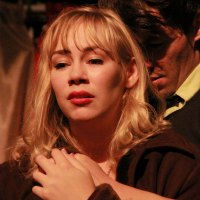 “I want to fly into a sky of you, dear, but first I’ll need some happy thoughts.”

Springboard Theatre’s inaugural production is set in 1929 Boston and loosely based on the story of Peter Pan. This time, the fairies are homosexual, the fairy dust is snorted, and “Wendy” ends up becoming a burlesque dancer to keep up her fairy dust habit and her new life with Peter.

Instead of being forced to leave the nursery to grow up, 16-year-old Ursula is told she needs to find a suitor and leave her stepfather’s home. She is “rescued” by Peter, who nicknames her “Darling” and runs off with her not to Neverland, but to a speakeasy where all of society’s “degenerates” feel they belong. It soon becomes apparent that the “Lost Boys” are featherboys (male prostitutes), who Ursula’s intended fiancée’s father, the police captain, seems to have a personal vendetta against.

Director/Choreographer Dawn Ewen did a fantastic job – even with a large cast, there was no shortage of well-thought-out action onstage at any given time. From creative set transitions to the perfect amount of in-character improv/bantering, accompanied by an impressive array of costumes, I really did feel transported to the 1929 streets of Boston. This was a brave and challenging production for a new production company to start with, but it definitely succeeded and took on a life of its own.

The hand-clapping musical finale was truly joyful, announcing “Clap Your Hands If You Believe In Me.” From the applause at the end, it was apparent the audience believed in this new theatre production company.

From shadow play to comments about the “cleverness of me,” a true Pan aficionado will enjoy finding all the parallels between the original story and this unique production. At the end, Peter is faced with an important decision that would challenge any boy to decide whether to grow up and accept his responsibilities as a man.

One thing is for certain – you’ll never look at Peter Pan the same way again.