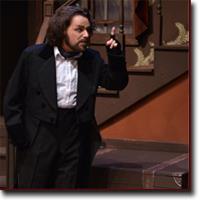 It was a dark and stormy night; the rain fell on Vancouverites throughout the city - except in Deep Cove, where a handful of citizens sought refuge from the storm, filing in through theatre doors, and shaking off their dampened garments. With the roof as their umbrella, the crowd took their seats in comfort and warmth, gazing upon the set of an Old English inn.

The play, being presented at the Deep Cove Shaw Theatre, was a mystery comedy spoof by Tim Kelly. The plot revolved around the kooky Salt Marsh family and their ‘atmospheric’ home, Ye Olde Wayside Inn, an out-of-season old lodging rumored to be haunted by the local kids. The audience watched on as a parade of pretty women and rag tag visitors arrived on the wave of a brewing storm, each seeking refuge for their own range of reasons.

The Salt Mash family, comprising cousins Ebenezer, Hepzibah, Arabella, and Uncle Silas, kept their visitors on edge with their peculiar habits and family skeletons. As the storm amplified so too did the sinister escapes of this curious Salt Marsh crew, leading to a final climax of confusion and horror for all those involved.

The play itself bore slight resemblance to the 2009 film and thriller spoof, Dark and Stormy Night, which also followed a group of strangers and family in a mysterious old house in the midst of a storm. Unlike the movie however, we are well aware of the villain in this play – the hair-raising character of cousin Ebenezer. He has all of the marks of a true villain – a maniacal laugh, swaggering step, unnerving gaze, obvious scars, and a tendency to indulge in his drink. John Cousins’ portrayal of this psychotic man was certainly a highlight of the evening, stealing the stage from beginning to end. He had ease on stage, and a natural way of falling in to his role, wherever it took him.

Another character who won a few laughs was that of the hired help, Olive, portrayed by Judy Levitt. Though short on lines, this character shifts between costumes with an air of haughty disgust for both her position and the visiting newcomers.

While the music and lighting was appropriate, including well-timed ‘blackouts’ when tensions were highest, I would have preferred the stormy sounds to be turned down a notch while the actors were speaking. I was also somewhat thrown off by the quick turn around between climax and dénouement, which forced the characters to explain rather than show what had happened in the missing moments. That aside, there was some good lines (“I’m smiling Sal the Beauty Gal, but I’m not smiling anymore!”), and the overall ambience was in keeping with the tone of the play.

Though somewhat predictable, the play is fun to watch, and I suspect will smooth out any current wrinkles as the show progresses. It is appropriate for all ages, but does depict scenes of drunkenness and mild violence. For those who enjoy their dark spoofs, it’s certainly a suitable option for an evening out supporting the arts – especially on a dark and stormy night.