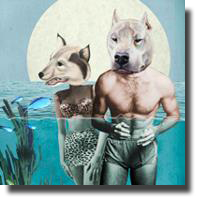 Danny is not someone you would want to mess with. He’s a typical headbanger on a very short fuse. He’s a guy that swings first, and then asks questions – well, maybe he doesn’t bother to ask questions. Even Danny’s friends call him “the beast.” Roberta is almost his female equivalent. She is a complete social misfit with few redeeming features. A former pregnant teen-age bride; now 31 she’s bitter towards her parents who forced her into the marriage.

In the opening scene, Roberta sits alone nursing a half glass of beer and a bowl of salted pretzels in a run-down neighbourhood bar. She doesn’t seem to be satisfied with her own company. She’s looking for someone who will share a beer with her and perhaps later, her bed – even someone as dangerous as Danny.

When Danny ambles into the bar with a pitcher of beer and sits at a table on his own, Roberta pretends not to notice him. Danny doesn’t give any signals that he is in the mood for small talk and the only thing this pair might have in common is that they’re both “losers.”

But leaving well enough alone is hardly Roberta’s long suite. She is able to read and correctly interpret the warnings from Danny’s surly demeanour, yet inexplicably she attempts to ingratiate herself into his space.

Under Jason Goode’s direction, the pair is allowed to find their mysterious chemistry and somehow inside the personal warfare they manage to find it. Goode has been able find two credible actors that truly look the part. Aleks Paunovic (a former boxer) looks every bit the brooding, untamed psychopath who is ready to ''jump out of my skin.'' The normally wholesome looking Lori Triolo transforms herself into a fearless savage, who has accepted that her best days as a beauty are far behind her.

Less credible is the playwright’s exploration into the couple’s dramatic, simultaneous transformation into ardent lovers after a single faux romantic episode in Roberta’s bedroom. Given the character’s earlier development, the bathos requires the audience to suspend the narrative’s plausibility.

Also, perhaps in an attempt to maintain focus on the play’s central characters, this mounting reduces production values to the bare minimum.

These two elements aside, it would be hard to leave the theatre after seeing this 90-minute pièce de théâtre without a sense of “shock and awe.”