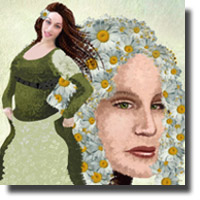 Brian Friel’s semi-autobiographical memory play, Dancing at Lughnasa (pron. Loo-nah-sa) was chosen as EXIT22’s first presentation of the new season. Easy to understand the rational; Friel’s period drama, about five Irish sisters who share their hopes, dreams and especially their mischances, is a true ensemble piece that affords proportionate opportunities for the entire cast.

The story is introduced by Michael Evans (Robbie Carley), an onstage narrator as he recalls a vivid retrospection of his time as a seven-year-old living with his single mother and her four unmarried sisters in Donegal, Ireland. Michael’s recollection covers just a few weeks in the August of 1936, yet evokes a watershed series of events that calls to mind the last time there was complete joy in the Mundy household.

Mr. Carley takes down the invisible wall between stage and audience, intermittently relating bite-size extracts of the narrative arc. In his secondary role, that of observer, he is omnipresent drifting through the action with purposeful transparency, as though scrutinizing a collection of sepia-toned photographs in an old album.

This concept even seemed to be reflected in Heidi Wilkinson’s stunningly detailed set. The Mundy’s kitchen, which takes up roughly three-quarters of the stage, is painted in rich brown-grey hues with large print sepia photographs hanging loosely from the walls.

Three events appear to have special significance for seven-year-old Michael, unseen throughout the play’s entirety: the procurement of the first Mundy family wireless receiver (radio) given the name “Marconi,” the return of his quirky uncle after spending half his life in a Ugandan leper colony and bonding with his errant father and seeing the temporary high spirits he brought to his mother.

Like most of Europe in the mid-thirties, Ireland was economically depressed. Money was scarce and eligible young men even scarcer. The Mundy sisters hadn’t completely given up on finding a husband. Nonetheless, they understood the odds were long and getting longer. This didn’t stand in their way of enjoying life in all its aspects. They yearned to dance, often out of gladness, but occasionally out of sheer effrontery.

The audience seemed to love Sydney Doberstein, who brought appropriate innocence to the role of Rose Mundy. I liked Laura Miller as Chris, who showed many of the nuances of someone inflicted with both pride and pain. Devon Thor deserves special mention as Kate, the older and wiser sister. Rose McNeil and Hannah Williams showed themselves capably as Maggie and Agnes.

Andrew Harvie made the most of his role as Father Jack. He was totally believable as a missionary priest who had spent too long away from home. The same might be said of Graeme Thompson as Gerry, Chris Mundy’s gallivanting, sometimes Welsh boyfriend. I wonder though, why the faux English accent? Perhaps his gadabout character was considered more conducive to being English than the perceived steadfast Welshman.

An Interview with director Dawn Moore

For the third successive year, Dawn Moore will helm the season opener for EXIT 22, the production wing of Capilano University’s theatre program. Professor Moore is a member of the Capilano University theatre faculty and Chair of the School of Visual and Performing Arts.

I had the opportunity to chat with her about this month’s student staging, Brian Friel’s Dancing at Lughnasa (pron. Loo-nah-sa). Lughnasa is Gaelic, meaning the month of August; it takes place in Ireland, and is about Irish people. I asked if the actors were getting coaching to capture the distinctive Irish brogue. “Accents and dialects coach Doug Abrahams is helping with that aspect,” Dawn informed me. “The actors will be able to speak (with the accent) at a convincing level. Conveying the character will be paramount over the precise imitation of a regional dialect.”

Brian Friel’s semi-autobiographical play hasn’t had too much exposure on this side of the Atlantic. So, Vancouver audiences may only know the work – if they do at all – from the 1998 film version that starred Meryl Streep. “It’s a memory play told from the point of view of an adult Michael, recounted from being a 7 year old boy,” Dawn explains. “However, the boy is unseen throughout the play’s entirety.”

“It’s essentially about 5 unmarried sisters, so it’s a good play for the women. While the actors are all the same age (early 20s) the sisters range in age from late twenties to forty-ish,” the director adds enthusiastically.

I asked Dawn what was it about Friel’s play that made it seem suitable for EXIT 22. “We (at Capilano U.) try to offer a balanced programme that challenges the cast and production team, as well as presenting something that will engage the audience,” she replied unhesitatingly. “Because of the extended narratives, it’s quite a difficult play to pull off, and Ireland in the Thirties was a pretty grim place, so (designer) Heidi Wilkinson has gone for a sepia toned set that will reflect this.”

Dawn Moore likes to involve her students as much as possible. She brought in Emily Pierron, who will be seen in EXIT 22’s next presentation Twelfth Night, as associate director. Emily is amongst other things, responsible for dialogue authenticity.