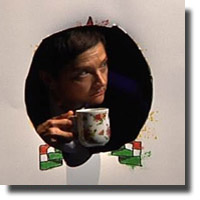 The Cultch
The Damage is Done: A True Story by Rita Bozi, with additional insights from Ken Cameron & Gabor Maté

The Productive Obsession mounting of The Damage is Done got off to a fashionably late opening performance. But at least, it gave the audience an extra opportunity to glance over the program and take in the odd looking set. It comprised of modified versions of the vertically mounted Canadian maple leaf and the Hungarian red-white-green tricolour with a curiously outdated central motif staged either side of a basic desk equipped with an overhead camera.

The play is essentially Hungarian-Canadian Rita Bozi’s self-styled, quasi-documentary presentation of her own traumatic childhood experience. Performed mostly in English, and occasionally in Magyar (Hungarian language), the play embraces multi discipline elements, such as dance and a musical score that includes snippets of Strauss, Supertramp and a tongue-in-cheek rendition of BB Gabor’s “Nyet Nyet Soviet.” The show actually begins with a video screening of Rezso Seress’ iconic “Gloomy Sunday” – popularly known as Suicide Song.

The storyline of The Damage is Done recounts the story of Bozi’s family fleeing their native Hungary at the time of the 1956 Hungarian Uprising. Bozi plays herself as well as her mother, brother and father in the pursuit of a therapeutic exploration of depression, addiction, and even potential suicide.

Bozi is an extraordinary storyteller, though at times the dialogue is so dense and the plot so complex, that at times, maintaining focus becomes a challenge. While being a key component to the production, the psycho –analysis session between Bozi and Dr. Gabor Maté (also playing himself), continues for too long.

Hungarian born, Jewish Holocaust survivor Gabor Maté is a former medical co-ordinator for the Palliative Care Unit at Vancouver General (Hospital) and is presently a resident physician with the Portland Hotel Society that provides services to marginalized citizens in Vancouver's Downtown Eastside. However, despite offering a valid contribution to Rita Bozi’s narrative, he was clearly out of his depth as a performing artist.

Bozi’s forthright analysis reveals how national trauma can so easily impact the family dynamic. She freely admits that working on the play has been therapeutic, but also hopes that audiences will take from it something about themselves.