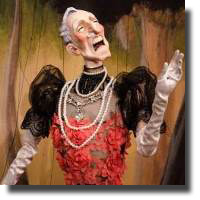 The Daisy Theatre created and performed by Ronnie Burkett

No one can bring wood and paper-maché marionettes to life better than Ronnie Burkett. The master puppeteer and story-teller continues to push technical and artistic boundaries with each new show. The Lethbridge string-puller is neither a ventriloquist nor is he a mimic. Nonetheless, he gives character to roughly a dozen or so 50-centimetre high dolls, freely changing his voice and even psyche to match the marionette he has on the end of a few strings.

The Daisy Theatre combines Burkett’s affection for vaudeville with blatant razzle-dazzle and is a curious departure from his full-length and fully-scripted shows. This partially-improvised puppet cabaret could be considered the creator’s homage to the underground theatre associated with Nazi occupation.

Burkett’s marionettes are given improbably far-fetched names that square with their exaggerated features: like the talking cow who is not called Daisy, but Madeline Porterhouse, the Major General Leslie Fuqwar who “gets the show back on track” with a cajoling rendition of “There are Fairies at the Bottom of my Garden,” and Dolly Wiggler a burlesque artist who opens the show by titillating the crowd by stripping down to her undies.

The show is not particularly evenly paced and some “acts” are disproportionately staged. Indy Frett, a balladeer gets short shrift, while Edna Rural, a widow from Turnip Corners, Alberta overstays her time in the spotlight “in Sears house-dress,“ lamenting on her late husband Stanley. Former Hollywood superstar, Esmé Massengill teaches the audience the proper way to acknowledge her presence. The spidery-legged diva brings out a member of the audience to be an on-stage “eunuch” – then discovers that he may not be a eunuch after all.

And of course, there is Schnitzel, the diminutive boy fairy whose cherubic charm won over the entire audience, brings an element of pathos to all the irreverent black humour. Finally, we meet Jolie Jolie, a faded French chanteuse who closes the show with the melancholic “When you tell a Joke, Everybody Loves you”

Burkett’s presence ranges from almost invisible to front-and-centre, occasionally taking time to explain certain aspects of the production to the audience. His Theatre of Marionettes presentation is ideally suited to the Cultch’s charming theatre space with its intimate terrace and balcony seating.