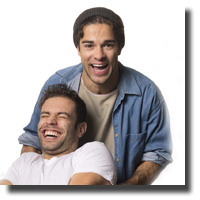 What a powerful production! And that's why Studio 58 is what it is: a training ground for professional actors. I was impressed by the acting of the three main actors: Markian Tarasiuk (McMurphy), Erin Cassidy (Ratched) and John Cook (Bromden). I can foresee Cook playing Lennie in Of Mice and Men very soon on a professional stage. The cold-hearted Nurse Ratched was played exceedingly well by Cassisy, and Tarasiuk was almost a clone of Jack Nicholson in the movie version.

When a play like this is directed by veteran director Patrick McDonald, you know it's going places. There have been sold-out shows like the matinee I went to last November 23rd, so better hurry and get your tickets. The matinee audience gave a standing ovation to these fine actors, including supporting actors who played the patients--Mike Gill, Owen Bishop, Carlen Escarraga, Arash Ghorbani, Derick Neumeir, Robert Garry Haacke--you'd almost believe they were real mental patients in an asylum.

Staffers of the hospital Sean Sonier, Warren Abbott, Shauna Griffin, Tom Krushkowski and Kamyar Pazande played their roles to the T. Anais West and Kim Larson as the girls in the party were colourful in their costumes and acting. The set design by Pam Johnson gave that feeling of coldness which reflected the treatment of patients in the last century. Costume design by Sydney Cavanagh was just right for patients and staff, and for the party girls, the 1960s look.

This must-see play goes on till November 30, so make sure you get your tickets before they sell out.