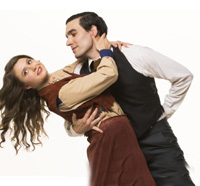 Crazy For You music and lyrics by George Gershwin & Ira Gershwin

What a show! A prolonged standing ovation at the end of this almost 3-hr show, but everyone in the audience was engrossed, and the players were focused and kept us entertained every minute of the show. Lead stars Gaelan Beatty and Kate Blackburn were full of energy, and carried the show with elan. The ensemble, especially the Follies, (see side image) was simply terrific.

Musical Theatre is alive and kicking in Vancouver, thanks to the Musical Theatre Major at Capilano University where most of the cast graduated. Accolades to the Creative Team, especially Director Barbara Tomasic, Musical Director Christopher King, and Choreographer Julie Tomaino. And Kudos to the rest of the team--Set Designer Marshall McMahen, Lighting Designer John Webber, Sound Designer Bradley Danyluk, and Fight Directors Mike Kovac and Ryan Bolton.

Some scenes were played out really well. I enjoyed the "mirror" scene with Jonathan Holmes (Zangler) and Beatty (Child). That was excellent comedic acting. The scene where the ensemble danced with brooms (see top image) was fantastic. But Beatty and Blackburn were a perfect match. They danced, kissed and interacted so flawlessly, and they danced as though they were one body. Such beauty and grace!

This is a must-see show, so be sure you get your tickets before the show sells out.