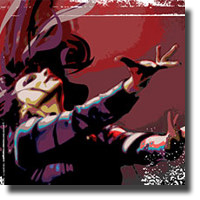 Sinha narrates her harrowing tale in the third person. She uses "she" but we know it's her she's referring to. She talks about herself, about The Girl who hides under the covers rather than trying to escape from the intruder, who breaks into her apartment with a crowbar. The rapist then puts a pillow over her head, placing the crowbar on top, but she never dares to look at her attacker.

This theme about violence against women is told in fragments, in non-linear fashion, jumping back and forth, somewhat in a scatterbrain approach. In one scene, she talks abut Krista in a psychiatric ward in LA, then she is in Winnipeg. This somewhat confuses the audience.

I was also a bit bothered by the sight lines. The usher kept on reminding the audience not to sit in the chairs close to the entrance because "you couldn't see everything". He was right. Those chairs should be taken out of there. Another thing is it would be helpful to have a raised stage because from where I was sitting in the third row close to the door, I couldn't see Sinha when she was sitting on the floor and acting. Perhaps she should do these scenes in the upper levels of the stage. .

If you look at it from the storyelling point of view, this one-woman show doesn't work. What works is the emotional content.The percussive sound effects by Debashis Sinha frightens and shocks. I felt an audience member behind me almost jump out of her seat in one instance. Kimberly Purtell's lighting and set design are impressive: a maze of black staircases, pinpoint light projections that take us to the scene of the crime and show us every piece of evidence.

Sinha won the 2012 Dora Award for best actress for this show. As an actress, she's good, but as a playwright, she needs to improve.