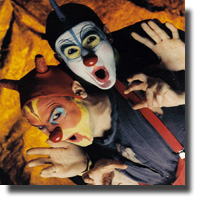 Even now, I still feel mildly embarrassed when revealing my early childhood tussle with coulrophobia (creeped out by clowns). Since the age of ten - aside from a slight relapse when I saw Tim Curry’s taunting portrayal of Stephen King's evil clown, Pennywise – I’ve taken a more considered approach to even the most hideous of professional buffoons – until now.

Michael Kennard as the belligerent, bossy Mump and John Turner as the more volatile and puerile Smoot offer a unique brand of clowning that you would not see at Barnum and Bailey. Mump and Smoot are a pair of comically grotesque, rather than scary clowns who live together as buddies (or perhaps brothers, or even lovers – no one is quite sure which) in a dark, dank cave on planet Ummo feeding on rats, bats and anything else that invades their abode.

In their latest incarnation, Cracked, that only a few weeks earlier was still a work in progress (and might still be), they face up to existentialism, death and defying the wrath of their god Ummo, who seems determined to expunge their relationship. They speak Ummonian, a kind of gibberish language with just enough English infusion, to allow audiences to understand roughly what is going on.

It’s easy to see how Mump and Smoot have garnered such a cult following. Their conjoined performance is part slapstick, part pathos and part dread - I cringed during the scene where Mump amputates Smoot’s leg with a box-cutter and a handsaw, even though it was really a crudely performed parlour trick. Through precise timing and masterful mime Kennard and Turner navigate the grotesque, blending vulgarity with vulnerability and mixing antipathy with poignancy.

Cracked is the final production of the Cultch’s current season. It’s everything you may want in comic theatre - except a cure for coulrophobia.