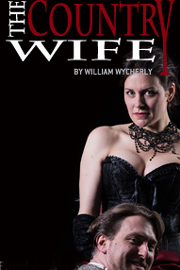 The play uses two curious plot devices: a scoundrel's devious plan of faking impotence in order to access married women under the noses of their clueless husbands, and the arrival in London of a naive "country wife" whose task it is to outwit her over-protective and overbearing husband.

Despite his creepy intent, Horner (Edward Foy) is seen by both the female characters and the audience as a lovable rogue rather than a reprobate. The news of Horner’s imaginary condition apparently doesn’t reach Pinchwife (no first names, this is 17th century England) and his comely wife Margery (Masae Day). Pinchwife’s (yes, he does get his wife pinched) stratagem of restraining his Mrs from the temptations of city life ultimately has the obverse effect of driving Margery into the eager arms of the incorrigible Horner.

Wycherley's romp is typically loaded with double entendres. In particular, one scene has Horner talking about his “china collection” with Lady Fidget (Alexis Kellum-Creer) and Lady Squeamish (Michelle Morris) right in front of Jasper Fidget who never picks up on “china” being a euphemism for sex.

Director Tariq Leslie obviously made a conscious decision that for this type of play, if plenty is good, then more is even better. While the dialogue is delivered in Olde English, Julie White’s handsome clothing is more modern than medieval. Most amusing perhaps is Dainty Fidget’s equestrian outfit, which has actor Alysson Hall strutting around the stage with a riding crop, portraying her character as anything but ‘dainty.’

Masae Day is perfect as the eponymous country wife. She is coquettishly corruptible, while providing a relevant feminist foil to her husband’s chauvinistic demeanor. Edward Foy is disarming as the dastardly anti-hero and Ashley O’Connell is delightfully over the top as Pinchwife.

At two hours and forty-five minutes, The Country Wife is a challenge to the audience’s attention span. The story has two essential plots plus a compelling subplot served up in the form of colloquial prose dialogue that requires assiduous attention. Nonetheless, if you can keep pace, the reward is a very enjoyable production.