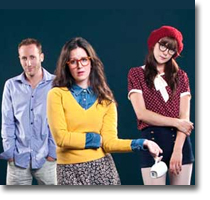 Meadow and Holden (Gili Roskies and Jay Clift) run a neighbourhood, free-trade organic coffee shop that plays underground music for themselves and their customers (regardless of whether they enjoy it). Meadow takes care of pecuniary matters and Holden, who regards himself as a counter- cultural reformist who habitually votes Green Party, looks after the facile aspects.

Their universe appears to be unfolding as it should (or as Holden wants) until Meadow’s former boyfriend (who knew her as Megan) from her college days, drops by her coffee shop. Patrick (Josh Epsein), who has recently returned from working in Dubai (U.A.E.), has a personal goal of renewing previous passions with Meadow (or Megan). He enlists the unwitting aid of regular customer Andi (Katey Hoffman), who already has an unhealthy fascination for Holden. Will Meadow and Holden’s relationship sustain through Patrick’s determined challenge?

Director Rachel Peake keeps the play’s narrative close to the surface, sensibly allowing it to be driven equally by the light dialogue and Lipovetsky’s dozen cleverly crafted songs.

Drew Facey’s broad set is evocative of any independent coffee counter that might be favoured by urbanites anywhere, making the production ideally suited to the actor-friendly theatre space. Accompanist Mishelle Cuttler and her upright piano doesn’t look out of place constantly visible at stage right.

While not possessing particularly mellifluous voices, the talented cast handle the show’s poignant tunes with sensitivity and the blithe tunes with verve. Gili Roskies has the strongest voice, though arguably the weakest role. Josh Epsein does all that’s called for in bringing out the play’s conflicts. Katey Hoffman won me over, and I suspect, the entire audience, as Andi the quirky stalker who knows all about Oxytocin but nothing about herself. Jay Clift grabs most of the laughs and steals some of the scenes as Holden the bellicose anti-mainstream dude.

Lipovetsky offers an engaging and in some measure a bittersweet portrait of four people undergoing crises of identity and confusion about where they want to go and how to get there. It’s not perfect. Some fine-tuning may be necessary ahead of future mountings. In particular, the scene where Meadow demonstrates her commitment to Holden by having her nose pierced with a bill spike requires serious adjustment.

Cool Beans is the name of Meadow’s coffee shop. But “cool beans” is a slang expression often heard in the seventies relating to something awesome or especially creative – perhaps an apt description of this pièce de théâtre.