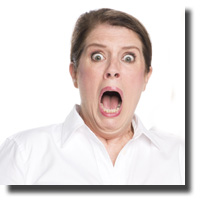 Conversations with my Mother by Stacey Kaser and Alison Kelly

Dr. Hyacinth Burdock-Milliken has just died. Although, you wouldn’t know it, she still has plenty to say and actually gets most of the best lines in this new Canadian play. Hyacinth (Patti Allan) was a professional psychologist and single mother – a bad combination, if you happen to be one of her daughters – and just can’t let go of running her daughters’ lives, even though they are both in middle-age.

Lily (Deborah Williams), already a mother to three sons, finds herself grudgingly pregnant. Heather (Alison Kelly), diametrically opposite to her older sister, is a career driven CEO and looking to fulfill her well-ordered lifestyle by adopting a child through a surrogate mother.

Many of the “conversations” that Lily and Heather have with Hyacinth (why do these women get botanical names?) involve preparation for child-rearing. Lily, who presumes her mother’s disappointment at her career choice (or actually lack of) is the first to experience an apparition. Heather, who has sustained a mentor-protégé relationship with her mother, is indulged by her mother’s eidolon much later.

Conversations with my Mother, Gateway Theatre’s season opener, not only boasts an all-female cast, but is also written by the female partnership of Stacey Kaser and Alison Kelly and has Katrina Dunn and Dawn Ewen in charge of direction.

Conversations with my Mother (not associated with the parenting manual of the same name) takes a surrealist glimpse at real life mother-daughter issues, and treats them with poignant humour.

Considering that the play has never been tested in front of a paying audience, it is notably well developed and evenly structured. For the most part the dialogue is sharp and the actors’ movement (especially from Patti Allan) natural.

Drew Facey’s stylish and well-constructed set with its match pair of divan seats and rococo conservatory initially looks to be at odds with a comedy, but it’s versatile enough to suit the production’s diverse settings. Troy Slocum’s ‘eidolic’ sound design fits coherently into the production, so too, does his curious choice of incidental scene separation music of “Papa Don’t Preach.”

Deborah Williams and Alison Kelly are utterly believable as dissimilar siblings, though a little less convincing as younger versions of their characters in flashback scenes. Patti Allan is stellar as the ghostly matriarch who shows us that even in death a mother can exert a powerful influence.