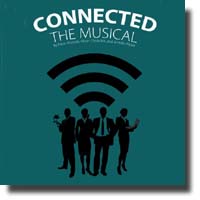 I’ve been bemused lately at seeing (mostly young) couples in a bar or restaurant sitting opposite each other totally disconnected. Close in proximity, but emotionally distant, they both have their eyes and fingers on a mobile phone tweeting or texting to person or persons unseen.

Connected: The Musical, a charming piece of theatre, tackles this social phenomenon with song and dance. Paul (Richard Meen) plaintively appeals to his paramour in song “Put down your phone or nothing will ever take place.” Later in the show, Stephanie (Jennifer Pielak) suggests to her employer Mark (Brad Rossington) a new approach to an online dating model where applicants would actually meet each other before receiving personal information.

Amanda (Alison Chisholm) is an ambitious junior executive who gets a promotion so that she can head up a project to develop an online dating system called meetmarketetcetera (ouch). When she finds herself unable to connect to her boyfriend Paul or her understudy Stephanie, she doubts her own ability to connect strangers with each other.

The narrative is driven by a collection of well-crafted songs that the entire cast gets an opportunity to sing with varying degrees of confidence. However, I felt that the dialogue in between the songs needs further development. I was unsure whether Connected is intended as a drama with incidental moments of comedy or a comedy that takes itself too seriously. Brad Rossington earnestly delivers some ludicrously funny lines without changing expression, almost as if he wasn’t expecting the audience’s amused response.

The talented cast of two girls and two guys doesn’t look like they would have any need of a dating service of any kind. Jennifer Pielak has arguably the best voice, but co-writer Alison Chisholm also acquits herself well. The foursome comes together with the most waggish song in the show “Am I Really a Bitch?”

None of the cast are real dancers, so choreographer Andrea Loewen keeps the dance vocabulary suitably simple. Lauchlin Johnston’s set is essentially a black box save for hanging facsimiles of app icons and a few prismatic boxes that serve as generic office furniture.

Connected: The Musical is really about missed connections. Despite some minor issues with pacing and streamlining it has much to recommend it. Its back story of office politics should titillate anyone who, well.... works in an office.