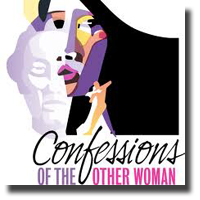 urban ink productions, Visceral Visions and the Vancouver Playhouse Theatre Company
Confessions of the Other Woman by Valerie Sing Turner

In spite of its tangible title, Confessions of the Other Woman has very much a non-linear, abstract form of storytelling. Confessions is Valerie Sing Turner’s first play and she was able to develop it fully through an award from Enbridge playRites Award for Emerging Canadian Playwrights. Ms. Turner also plays the central character, Eve a person looking back on an affair with a married man.

I had the opportunity to meet co-directors Diane Roberts & Gerry Trentham at a pre-show reception. Their artistic styles and personalities are as diverse as their ethno-cultures, but obviously bring a rare synergy to a multi-genre, multi-cultural production like Confessions.

Ms. Roberts, who came to Canada from Surrey England, mentioned that the adultery element in the play is only the starting point – the cardinal theme is love – and what you do when you find it. Gerry Trentham said that directing such a play that covers primarily a female perspective on intimate relationships was indeed incredibly challenging for a white male. Trentham is also a choreographer, but chose not work on the dance vocabulary for Confessions favouring bringing in Tara Cheyenne Friedenberg.

Eve (Valerie Sing Turner) and Sam (Kevin Loring) have been having an affair. For Eve, a fortyish Asian-Canadian and a hopeless romantic, she believes that she has found her soul-mate. Sam is married and still loves his wife – or so he claims. Eve never meets Sam’s wife (nor does the audience), so while she bears no remorse towards “the wife” she is nonetheless painfully aware that she is the third person in this triangle, and torn between right and wrong. She has had one failed marriage – to Derrick (Matt Ward) – or perhaps it was only Eve that failed.

Eve now has to try and come to terms with her transgressions and restore her self esteem. She gets gratuitous help from her friend Tina (also played by Kevin Loring) who provides a moral compass. But eventually, her search for answers draws her to visions of her beloved grandmother (also played by Matt Ward) and a mysterious, phantasmagoric dancer (Matt Ward again).

The directors maintain a deliberately uneven pace and require the audience to suspend their disbelief. I found it best that one allow oneself to be absorbed in whatever was taking place. How else could you accept a young black man playing an old Chinese woman – without a costume change? The play employs a device that has the characters making their thoughts audible to the audience. This removes the invisible barrier between the performer and the audience.

The exotic looking Valerie Sing Turner is wonderfully watchable. She spends much of her time on stage dressing and undressing while pettifogging with Sam about the future of monogamy. She moves her slender frame with balance and agility, though she doesn’t appear to possess the physical strength to perfectly execute Tara Cheyenne Friedenberg’s dense choreography.

Turner’s first foray in writing shows an intelligent use of the allegoric style of storytelling, preferring the use of symbols to either soften or harden naked realism. A compelling example is her use of the harness she wears early in the second act that emphasises her internal struggle.

Confessions of the Other Woman plays at the Shadbolt Centre for the Arts until 25 February, then moves to Performance Works on 29 February to 11 March and then on to Evergreen Cultural Centre on 13 March.