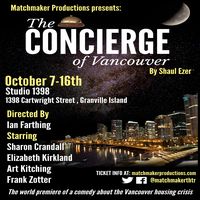 The Concierge of Vancouver by Shaul Ezer

Shaul Ezer’s looking glass into the hot topic of conversation many Vancouverites are so familiar with is spot on. Peeling back layers in the controversy swirling around Vancouver’s condo and rental market crisis, The Concierge of Vancouver cuts through and exposes many facets of the problem.

Ironically enough, the play is performed and is premiering at Studio 1398 on Granville Island, a stone’s throw from where the action is set.

Using four characters, with varying vested interests, Ezer’s play weaves a believable story. Against the backdrop of a Coal Harbour condo lobby and the office of a high placed banking executive, the characters bring to life a dialogue of morality, altruism, greed and conflicted interests.

The Concierge, Al Noseworthy (Art Kitching) does a great job centering the action. As the main character, he plays his part well, evoking a demeanor that one would expect a concierge to have while managing the various demands of his profession.

Agnes Harrington (Elizabeth Kirkland) the reporter, brings some tension to the play, as she aggressively pursues her self-interest. Samantha Wright, the bank executive, (Sharon Crandell) represents the financial aspect of the dialogue surrounding the housing debate. Her character brings into focus issues of money laundering, collusion and moral conflict. Fred McCashel as played by Frank Zotter, brings comic relief to the pace of the play.

The play uses a series of vignettes to throw light on the contentious issues around the Vancouver housing market. Does the end justify the means? Take in The Concierge of Vancouver to wrestle with this question for yourself.