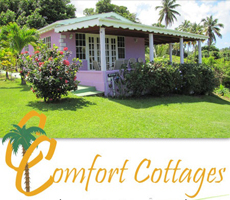 Comfort Cottages is a new comedy by best friends Jane Clayton and Judy Ginn Walchuk. Its simple storyline has its heart in Vancouver, but could easily be set anywhere. Nearly a decade from concept to first public performance, the play was inspired by a conversation between the two playwrights about where modest income, unattached women might find accommodation after they stopped working.

As Aunt Kitty’s only living relative, Katherine (Merrilyn Gann) a divorced, retired school teacher looks to inherit Comfort Cottages, but there are some conditions attached. “Comfort” has an almost literal meaning. The nefarious Aunt Kitty had operated the estate as a bordello that welcomed truckers and itinerate salesmen. In order to take possession of the property, essentially a group of chalets, she must agree to occupy Kitty’s residence for one year and inform visitors of her aunt’s demise.

To fulfill the conditions imposed in Aunt Kitty’s will, Katherine enlists her close friends: Belle, Eva and Flo (Marlee Walchuk, Suzanne Ristic and Annabel Kershaw respectively). The three women are struggling to make ends meet, so twelve months living rent-free is a viable option. Everything appears to be going well, with everyone even finding “a little bit of paradise” in their new surroundings. Everyone, that is – except Katherine, who was never fully committed. Will their friendship be strong enough to endure the strain of new relationships, media attention and a busybody neighbour who carries around an urn containing the ashes of his late wife?

There is rare chemistry between the four principle actors, offering the semblance of genuine friendship. In particular, Annabel Kershaw as the coquettish Flo steals every scene she is in. Suzanne Ristic as the quirky green activist Eva delivers some of the play’s best lines.

Male actors get short shrift, but Steve James as the family lawyer brings decorum to the daftness, while Vince Metcalfe as the eccentric neighbour adds character to the show.

Glenn MacDonald’s functional and well constructed set is split between an elegant living room with its former matriarch’s picture hanging on the wall and a well cared-for garden (complete with artificial turf).

Director Anna Hagan maintains a pace that keeps the audience invested. Despite turning a little maudlin near the end, Comfort Cottages offers audiences a charming piece of theatre with a back story that may titillate some avid gardeners. While it has much merit in its present form, further development of the dialogue to make the play more compact, could give it the potential to go national.