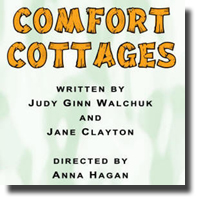 Comfort Cottages is a play for those for whom the thought of a retirement plan is a little too close for comfort. It is a light diversion, slightly suggestive and gently moralistic, which will make you laugh.

Katherines estranged Aunt Kitty has died and left her a motel with several cottages. It is a valuable piece of land but, as the lawyer (Sean Allen) explains, there is a catch to the inheritance. Before she can sell the place, Katherine (Merrilyn Gann) must live there for a year and, as they turn up, explain to Aunt Kittys regulars that the business is closed. She must do this gently and kindly. The real catch though is that Kittys regulars are truckers who stop at the motel for a nights R & R. Katherine is horrified but she has brought some old friends with her as backup for this meeting and they persuade her to carry on with their help. Belle (Marlee Walchuk) has been recently widowed, Eva (Linda Carson) is an aging hippy/therapist/fortune-teller/masseuse and Flo (Wendy Abbott) a similarly aging ball-room dancer. One by one the truckers turn up. They too have their own special needs, which are not what the women expect. Roger (Jim Hibbard) is a secret dancer, Simon (Terence Kelly) is a cross-dresser so innocent he doesnt realise it, and Big Ed (Keith Martin Gordey) harbours a hidden love.

The situation is ripe for risqué (though never smutty) banter and double-entendres which fly in the first act. The second half is more serious as the differences amongst the women come to the fore and home truths are flung. Worse, Their creepy neighbour Tom (Brendan McClarty) has called the authorities and the motel itself is under siege by protesters and Katherine, an ex-vice-principal, charged with keeping a bawdy-house and growing pot.

Nine accomplished actors present the nine carefully drawn characters with affection and without caricature. Under Anna Hagan's firm direction the cast work together like old pro's; it is Impossible to distinguish one over another in this ensemble piece. Merrilyn Ganns warm and intelligent Katherine was as engaging as Terence Kellys fey Simon/Simone. Marlee Walchuks feisty Belle balanced Keith Martin Gordeys reserved Big Ed. Flirty Flo, flighty Eva, steady Adam all had personality plus and even the odd man out, McClartys unhappy Tom, was of their world. If anything was out of place it was Hibbards masterful dance at the end - tap not ball-room, but what a pleasure.

Though this was a staged reading, the stage was fully and lushly set by Glenn MacDonald and R. Todd Parker. Lighting by Graham Ockley and sound by Chris Alan underpinned the whole.

There are perhaps still some structural difficulties with this first play by Jane Clayton and Judy Ginn Walchuk, exits and entrances seemed occasionally awkward for example, and the passage of time sometimes not clear, but they have created a play with tension and interest in which kindness is paramount, no mean feat.