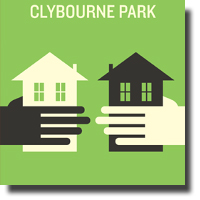 The Arts Club opened its 49th season with a wicked twist of political incorrectness. Clybourne Park by Bruce Norris is a two act play, though it could be easily described as a companion pair of single act plays; since it approaches the same theme from opposite sides of the social spectrum.

The play’s more dramatic first act is set in a recently sold house in Chicago’s middle-class suburbia in 1959. Bev and Russ (Deborah Williams and Andrew Wheeler) are mere days away from leaving the house they have occupied for several years. They don’t appear to know or even care that it’s being sold to a black family. This sets up a potentially explosive situation provoking an inevitable confrontation between Russ and his segregationist neighbour Karl (Robert Moloney), a character inherited from Lorraine Hansberry’s play, A Raisin in the Sun.

Fast forward to 2009. The same house is in renovation mode. Williams and Wheeler, who had the major roles in the first act, now have minor roles. Marci T. House, who played Bev and Russ’s black maid Francine while Daren Herbert had the role of her husband, now have meatier roles as a community representatives Lena and Kevin with a personal investment in this house. Robert Molony and Sasa Brown, who played Karl’s pregnant wife in the earlier section return once again as white married couple Steve and Lindsey who plan to carry out extensive reconstruction to the old place.

While the discussion is primarily to find a compromise between Steve and Lindsey’s remodeling and Lena and Kevin’s desire to retain the unique character of the neighbourhood, the conversation often descends into puerile quibbling over such minutiae as the capital of Morocco and deliberately inane jokes levelled at gender and colour.
In this piece of pithy satire, Norris underlines how far we’ve come and how we still have to go in coming to terms with inter-racial issues. Director Janet Wright (she plays Emma in TV sitcom Corner Gas) steers the play along a fine line between drama and comedy, occasionally threatening to open a can of racial worms.

Clybourne Park is truly an ensemble piece with the seven member cast assuming a proportional share in the production. Deborah Williams and Andrew are excellent as people struggling in opposite ways to deal with their sorrow over a lost child. Marci T. House shows flexibility in the transformation from subordinate to monocratic.

Though Clybourne Park is set in Chicago (a comparatively integrated city), similar racial tensions can exist just about anywhere. We all should try and put petty prejudice aside for the sake of racial harmony.