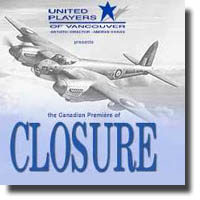 Octogenarian Canadian playwright and author Ron Blicq’s simply titled play Closure is, despite the United Players poster of a de Havilland Mosquito, less of a war story than it is about kinship.

Donald Barlow is one of roughly 30,000 born as a result of a relationship between a British civilian mother and a visiting Canadian serviceman stationed in the U.K. during WWII. The play opens with the middle-age Englishman convening a close family gathering to discuss embarking on an effort to determine the identity of his biological father.

Through the subsequent probing of the fictitious agency, “Connection Closure” Barlow discovers that the father, who has yet to learn of his son’s existence, is Gordon Devereaux and is alive and living in Vancouver. When the former Canadian Air Force pilot is confronted with this revelation, his reaction is notably hostile, initially refusing to believe, then refusing to accept involvement. The cantankerous senior has “closed the door” on his wartime experience, but hasn’t counted on a new friendship with great-grandson Gordie.

The audience seemed to love Amitai Heyl, who shares the role of nine-year-old Gordie Summers with his brother Jonah. He brings appropriate precociousness to an integral character. Laura Miller turns in an earnest performance as Claire Summers, a journalist with a personal agenda; although, she looks (and is) too young to be a mother of a nine-year-old son. It’s only a year since a saw Ms. Miller in a student production of Dancing at Lughnasa. She was impressive then as Chris Mundy and is obviously now fulfilling earlier potential.

Donald’s wife Daphne is the play’s weakest character, but that is hardly the fault of Kate Robbins who does her best to bring sympathy to the role. Veteran actor and actual great-grandfather John Burnside is perfect as ex-serviceman Gordon Devereaux. His second act soliloquy provides us with the pathos of an unwilling participant in a world changing event.

Director Bernard Cuffling prefers a light hand on the actor’s movements, yet maintains an even pace throughout the play’s 100 minute run.

Todd Parker’s detailed duplex set, separated by a central stage entrance, allows the audience to easily follow the action as it switches between the Barlow’s home in Nottingham, England and the Devereaux’s home in Vancouver. The main fault I found with the staging and seating arrangement was that if you had a good sight-line for one side, you likely had a poor sight-line for the other.

Closure is an emotional odyssey for audiences, and (probably) for this ensemble cast. The ending is perhaps somewhat predictable, though nonetheless worthwhile reaching.