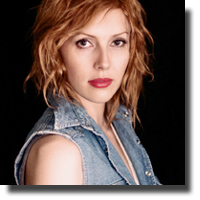 British playwright, Patrick Marber’s four-handed play, Closer is a black un-romantic comedy. Set in London, at roughly the end of the twentieth century, it follows two men and two women with some pretty serious character flaws and their avaricious mating games.

Marber panegyrizes the play’s prime motifs of base desire, deceit and rapacity through the four shallow, self-absorbed people who demand more from a relationship than they’re prepared to give. Indulgence trumps restraint, own gratification more important than the other’s needs.

We first encounter Dan (Troy Cherkowski), an under-achieving writer working in what he calls the “Siberia of journalism,” and Alice (Lara Rova), a free-spirited exotic performer, in a hospital waiting-area after Alice is injured in a traffic accident. They become fast friends and instant lovers, and in the next scene, obviously at least a year later, Alice has become Dan’s significant other and muse.

At this point we meet Anna (Alexis Kellum-Creer), an exanimate, jaded photographer who regards her clients simply as “jobs.” She has been commissioned to photograph Dan for the dust-jacket of a book he has written about Alice’s life. During the photo session, Dan attempts to entice her into a sexual tryst.

The play really sinks or swims on the chemistry between the four actors. The two women fare much better than their male counterparts. Lara Rowe, who bears a passing resemblance to Scarlett Johanson, is especially convincing as the freewheeling Alice. Alexis Kellum-Creer, who has to play against type as the emotionally stunted Anna, is immensely watchable.

Troy Cherkowski is essentially credible as a disengaged partner, yet somehow looks mismatched with both Rova and Kellum-Creer’s characters. Christian Sloan certainly looks the part of the urbane doctor, but overplays his role as a shunned lover.

Director Adam Janusz makes the most of the black box set and minimal stage props. He effectively uses an intercutting device – a ploy that has two scenes simultaneously taking place on the same stage – to maintain the narrative at a steady pace.

Marber advances very little subtlety in this play. There is a dramatic twist near the end, which seems an obvious attempt at irony. The real irony, however, is found in the title: after a carnal merry-go-round, the four exponents end up, not “Closer,” but further apart.