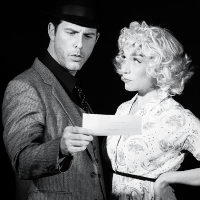 Putting It Together Collective
City of Angels

This is an enchanting musical that keeps you intrigued and entertained. It is interesting how many 'themes' intertwine and how all the pieces fit together in this fascinating play. Kudos to the Director, Jennifer Copping and Co-Director, Sylvia M. Zradic. The orchestra, the dancing and the powerful singing voices, particularly of the lead performers – Crystal Balint, Michael Lomenda, Donal Thoms-Cappello and Jennifer Copping make it an amazing show.

This story has many threads... it is a study of the raw emotions of a young, ambitious writer, Stine (played well and enthusiastically by Donal Thoms-Capello) who places his hopes and dreams in editing his play and that of a chauvinistic movie-director, Buddy Fiddler (skillfully portrayed by Paul Herbert) who wishes to change the story to suit his own pride and greed; it is a story of love and hate, sex and wealth painted by this young writer as the actors play their part bringing the story to life before our very eyes.

Crystal Balint as Alaura, the conniving fortune-huntress and as Carla (Buddy's wife) in the Hollywood story, is brilliant. Michael Lomenda as Stone, the Private Eye plays his role with incredible talent and gusto. Lots of pieces intertwine between the actions of the play and those of the lives of the young writer and his ambitious movie-star, wife. The interplay between 'reality' and 'fiction' shines brightly as Gabby (in the real world) and Oolie (in the Hollywood version) lament how their men won't listen to them ("What You Don't Know About Women").

Screens on both sides of the stage also compete for the attention of the audience. Sometimes it can get distracting as many of the screen acts are flashbacks. The props are simple but effective. The contraption that kept the old man in a 'cage' is particularly eye-catching. The go-cart that gives some in the audience a fun ride and enters the stage unexpectedly, adds to stage glamour.

The actors all do their part superbly. The music and singing is breathtaking. The picture of crime and that of LosAngeles as the Sin City of the 40's is vivid and realistic. Though the first half of the play seems a bit too long, this play keeps you enthralled and fascinated till the very end. It is a brilliant performance well worth seeing.