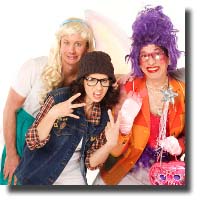 The hilarious Allan Zinyk plays the wicked stepmother and a wild-haired millionaire, King Grumpy. Towards the end of the show as the characters went about interfacing with the audience, Zinyk sighed, "I'm exhausted." . Well, playing two roles is indeed gruelling. Demers also put a BC twist to the fairy godmother played by James Long dressed as a BC ferryboat.

But the singing and dancing was incredible. Hats off to Donna Soares (Cinderella): she sings, dances and plays the sax. What talent! Dawn Petten as Prince Grumpy was likewise funny. CBC's Gloria Mackarenko was present in the audience and came on stage to give Petten advice on how to capture Cinderella's heart. And true enough, her advice on getting a date with an invite for latte worked.

Young and old loved booing at King Grumpy who was building his Grump Towers in Vancouver with his motto "Money buys everything", as he announces plans to buy off Vancouver.

Kudos to Director and Dramaturge Amiel Gladstone, Musical Director Veda Hille who sang "Turn your cellphones off" and a litany of sponsors in Gregorian chant at the start. Choreography by Tracey Power was fabulous, and Pam Johnson's cartoonish set was just a fit for the the panto's mood.