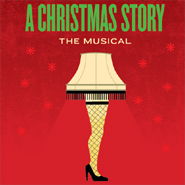 All Ralphie Parker wants for Christmas is a Red Ryder carbine-action pellet gun. He knows the odds are long on actually getting it, especially when all the adults in his life, including his mother, his teacher and even a misanthropic Santa Claus are warning him "You'll shoot yer eye out!" Discouraged, but undaunted by the odds, Ralphie works on an action plan that will tip the edge in his favour.

This top quality Artsclub Theatre production is based on Bob Clark’s 1983 movie, A Christmas Story that featured a 13-year-old Peter Billingsley as Ralphie (Billingsley is still active in the film industry, including two projects this year). The story is set in fictional small town Hohman, Indiana, in the weeks leading up to Christmas in a simpler, more innocent time when kids were only bullied in the schoolyard (and only by other kids).

Despite its extravagance and over-the-top verve, A Christmas Story, the Musical succeeds without diluting Jean Shepherd's original profound social message. The well-crafted songs from the partnership of Benj Pasek and Justin Paul add levity (as if more levity were needed) to the nostalgia.

The players certainly weren’t let down by the production qualities of Sheila White’s costumes and Amir Ofek’s superbly constructed rolling sets that evoke time and place of a Midwestern family home in the nineteen-forties. Full marks to director and choreographer Valerie Easton for bringing together such a large cast that includes emerging talents like Valin Shinyei (Ralphie) and seasoned professionals like Sara-Jeanne Hosie and combining them with marvellous synergy.

A Christmas Story, the Musical is a highly satisfying show that provides great fun for the whole family. The film version of A Christmas Story will probably be part of Christmas television fare this year – it usually is. But why watch the old version on a small screen, when you can see this new version on the live stage?