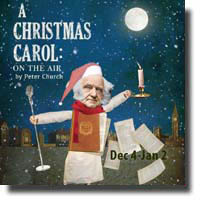 Pacific Theatre
A Christmas Carol: On the Air by Peter Church

In Peter Church’s A Christmas Carol: On the Air, Charles Dickens’ classic tale of redemption is served up as a live radio broadcast. There have been numerous versions of Dickens’ seasonal novel: from Alastair Sim’s definitive 1951 interpretation of Ebenezer Scrooge to Bill Murray’s quirky take on a cynical television executive in Scrooged. But “seeing” it on the radio - you remember radio, that’s television without the pictures – gives the story a whole new perspective. Dickens, of course, couldn’t have written Christmas Carol with radio in mind, but had been able to, he couldn’t have done a better job.

A Christmas Carol: On the Air works with seven actors reading from “script-in-hand.” It’s delivered partly in direct narration by Peter Church and Diana Squires, but largely by correlative role-play from the entire ensemble including bits by music director Chris Lam. The narrative arc is supported by some very creative sound effects delivered by the actors themselves. Live on-stage sound effects certainly compliment the visual experience, but distract the audience from the play’s sentiment.

To add to the aura of live radio, the “broadcast” is interrupted with seductive commercial jingles advertising products from medically endorsed cigarettes to shampoo. The euphonic jingles showcase the tight harmonies of Julia Siedlanowska, Diana Squires, and Kirsty Provan. Paul Griggs brings that old curmudgeon Ebenezer to life with craft and cunning.

Amy McDougall’s set consists only of five standing mikes, all of which are merely props, a shallow platform and a table covered with an assortment of household objects used to produce the desired sound effects. Her choices in clothing however, reflect the business-like demeanor and environment of a professional radio station in the middle of the last century.

For a play that essentially emulates a radio program, you might not expect much in the way of movement, but the cast draw on a fair share of physical comedy. Despite some uneven pacing, the outstanding ensemble instill A Christmas Carol: On the Air into an enjoyable blend of drama, humour and family-friendly fun.

Try not to miss this nostalgic trip back to a time when our parents (or if you’re that young, your grandparents) needed nothing but a radio and their imagination for entertainment.