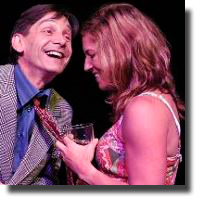 A CHORUS OF DISAPPROVAL by Alan Ayckbourn

In his native England, Alan Ayckbourn, who just recently was given a special ‘Tony’ award for Lifetime Achievement in the Theatre, may well be the most performed playwright, save for William Shakespeare. He is certainly prolific. If one counts his adaptations and plays expressly for children, his works number around eighty.

Deep Cove Stage Society’s mounting of Ayckbourn’s ambling comedy A Chorus of Disapproval is played gleefully by an exuberant cast in its original mid-eighties setting. Unfortunately, director Damien Inwood never manages to overcome the play’s two serious flaws, one concerning its length and the other being the playwright’s failure to blend its nested backdrop, Brecht and Weill’s Beggar’s Opera within its main motif.

The opening scene has a local operatic society taking its bow at the end of its opening (and perhaps its last) performance of Beggar’s Opera. The play’s mise en scène then reverts immediately to flashback three months earlier at the start of rehearsals; thereafter moving slowly forward until eventually the same scene is repeated two-and-a-half hours later.

When recent widower Guy Jones (Trent Glukler) auditions for a part in the community production, he gratefully accepts the small role of Crook-Fingered Jack, believing that it will open avenues to social intercourse. However, as rehearsals proceed, our hero is presented with an alternative kind of intercourse as he becomes involved in two affairs; one with the sexually voracious Fay Hubbard (Stephanie Florian) and another with production director's lugubrious wife, Hannah Llewellyn (Sarah Kate Devlin).

With the backing of his two new ‘friends’ and the rest of the women in the opera’s cast, plus some timely help from director Dafydd Llewellyn’s (why all the double consonants?) manic interventions, Mr. Jones (Britons were obviously more polite in the eighties) finds himself rapidly promoted to Matt the Mint, then Filch and ultimately to the lead of Macheath.

As the self-absorbed, obtusely professional Welshman Dafydd Llewellyn, Martin Carr turns in an energetic performance. At turns, he is cynically humourous (he refers to his spouse as his ”Swiss army wife”), pompously histrionic and frequently operating on a short fuse. In one of the show’s best scenes, that is both comical and poignant, Dafydd is conducting a lighting setup while barely out of earshot Hannah and Guy are having a lover’s quarrel right in the glare of the stage lights.

Stephanie Florian and Mark Ferraby each acquit themselves very well as a ‘swinging’ couple. Florian in particular displays remarkable comic timing as the lascivious and manipulative Fay. While Sarah Kate Devlin, who heroically steps in as a last-minute replacement as Hannah Llewellyn and bravely ignores an injured foot lacks real conviction in one of the primary roles. Trent Glukler, while generally playing the straight man as the nebbish Guy Jones to Martin Carr’s off-the-wall Dafydd Llewellyn manages to imbue his role with believable fluster.

Because of its technical demands, A Chorus of Disapproval can hardly be the easiest play to present and this production would have benefitted from quicker pacing in the first act. What the show lacked in polish and precision it at least partially made up for in ebullience and energy.