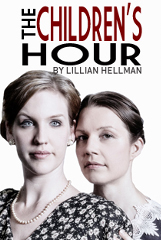 With its subtext of covert lesbianism, watching Lillian Hellman’s boarding school drama eight decades after it was written, one cannot help but see it now as a curious period piece. It’s likely that Hellman didn’t intend her play to be about a secret love between two female teachers, but rather about a very loud whisper that reverberates far beyond the whisperer’s desideratum.

Set in New England roughly at the time of writing, two teachers, Martha Dobie (Alicia Novak) and Karen Wright (Stephanie Elgersma), and their small private school for girls are socially dismantled when a malicious and manipulative student concocts a story that accuses them of being lovers.

Martha and Karen’s least favourite student Mary, played with astonishing conviction by young Laura Geluch, is, among other things, a habitual liar who you wouldn’t believe if she told the day of the week. So it’s perplexing to witness the ease with which Mary’s story is believed, even by her doting grandmother.

Director Alison Raine generally avoids the play’s controversial baggage and potential for grandstanding. Instead she focuses on character dynamics aided by forthright performances and Rebecca Burks’ minimalist set of basic furnishings and corner staircase works well with the theatre-in-the-square seating arrangement. Ms. Raine essentially recreates the opening scene with a theatrical device that visually introduces the characters to the audience. Mary charges round the stage, voraciously reading from a course book, watched by cast members standing motionless at the stage’s four entry points.

Pretty much the entire cast turns in capable performances. In particular, Alicia Novak offers a stellar performance as Martha, demonstrating the cancerous effect of false testimony that prepares the audience for the play’s tragic conclusion.

Time and civil progress has stripped away the controversial aspects of The Children's Hour. But damage caused by deliberate deception is a perennial concept.