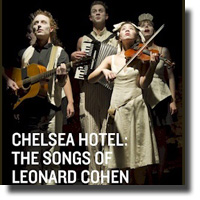 The stage for The Chelsea Hotel created a perfect setting for the Tortured Writer character, played by Kayvon Kelly, who immediately walked over to the small desk that had a bottle of whiskey on it. The walls of the hotel room had words scrawled on them, as well as piles of wadded up paper that had been tossed at them. Transformation is a key component in The Chelsea Hotel, so soon the writer’s desk turned into a keyboard.

The Chelsea Hotel is not a musical in the traditional sense because there isn’t a full story, but there is a range of movement, dance, and dialogue to accompany the music. Director Tracey Power said she wanted to “paint a poetic picture” and The Chelsea Hotel celebrates Leonard Cohen by creating a fresh musical interpretation of his famous songs.

The six cast members are each extremely talented and together they played an impressive total of seventeen instruments on the songs. At one point, I was surprised to hear Leonard Cohen’s lyrics accompanied by a banjo. In “I’m Your Man,” a cigar quickly turned into a kazoo to complete the musical merriment!

Costumes of the characters added to a crazy carnival feeling up on the stage. Side-man (Steve Charles) and Bellhop (Ben Elliott) were both wearing white face make-up that gave them an eerie resemblance to the Joker from Batman. Rachel Aberle and Lauren Bowler enlivened the stage as they strutted around in their black and white outfits, like two musical Sisters of Mercy serving cocktails. Marlene Ginader put on and pulled off the “Famous Blue Rain Coat” several times.

There were no set changes and the transition between songs was fast and seamless. The tempos to Cohen’s music were changed so much that sometimes it was only after hearing the lyrics that you would know which song had begun.

This effect, however, could be jarring, such as when a frenetic and discordant “Hallelujah” was played out under glaring overhead lights. At this moment in the show, I realized that I was missing the slow, dramatic unfolding of poetic lyrics, which is how Cohen would normally sing this song.

Meanwhile, up on the stage, the pace of the singing finally slowed. As the group moved into “A Singer Must Die,” Ginader and Kelly dropped down to the floor together and held tightly to each other as the music melded into “If It Be Your Will”. Then, a slow reprise of “Hallelujah” followed:

I did my best, it wasn’t much
I couldn’t feel, so I tried to touch
I’ve told the truth, I didn’t come to fool you.

With that final song, the show was over and there was heartfelt applause for the six multi-talented cast members and those others who had envisioned this show. The Chelsea Hotel is a theatrical performance that truly thinks outside the box.