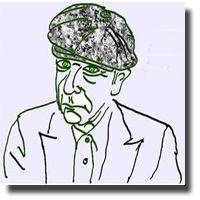 Have you ever wondered what it would look like if The Rocky Horror Picture Show had a one-night-stand with a Leonard Cohen Box Set at the Chelsea Hotel? Me neither, but Creator/Director Tracey Power obviously has. And the result is not a terrible beast; in fact it’s impressive.

Having seen the inside of a Chelsea Hotel room, the bare-bones set rang true – albeit with a few extra crumpled pieces of paper, in every corner, in piles, on the bed, ready to topple. The overwhelming towers of discarded ideas ready to fall gives a definite sense of overwhelming melancholy, which sets the scene nicely for what’s to come.

It’s important to note I am a Leonard Cohen fan. If it’s after 10pm and I’m alone listening to Famous Blue Raincoat, it’s safe to assume I’ll have a whiskey in hand. His music connotes intense sentiment to me. I had pretty high expectations of this production and luckily it did not disappoint.

The cast of this production is incredibly talented, that was clear right from the start. One writer and six muses, all sang and played a stunning array of musical instruments, bringing to life in a very theatrical way (almost too theatrically at times) the music of Leonard Cohen. Perhaps I’m just used to experiencing his music in a more solitary context. Maybe his music just says “loneliness” to me, not “extravagant musical number”.

The Writer, played by Adrian Glynn McMorran, left a significant impression on me. His voice was up to the challenge: intense and soulful when necessary, bold and angry for other songs. His 5 muses (who I inferred were there for moral and emotional support for writer McMorran as he drank and wrote alone in his Chelsea Hotel room) provided an abstract narrative of the writer’s experiences of lust, regret, love, and loss. The women, especially Rachel Aberle and Lauren Bowlers as the Sisters of Mercy, did their part in encouraging, chastising, and playing with the writer.

It’s also important to note that “Sideman” Steve Charles was all but forgotten until a very significant moment close to the end of the show. The lights are dimmed, a bluish light fills the theatre, and three players come out with delicate umbrellas, and the scene is set for Famous Blue Raincoat. The understated Charles as the quiet (almost forgotten) Sideman takes the lead vocals for this, one of my favourite songs. I was suitably blown away by his quiet yet earnest delivery.

In the end, the players were clearly having a great time and doing it well – trading instruments and bringing Cohen’s songs to life; I kind of wished I was on stage with them.