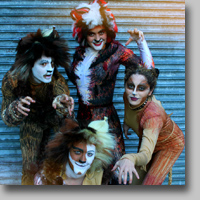 Ryan Mooney does it again! The January 30th Matinee performance was jampacked, mostly with kids and their grandparents, and the show was energetic and funny to the delight of the kids and the seniors.

I spoke to Mooney before the show, and he said he was in Europe for five weeks watching a lot of theatre. He must have picked up some tips there and injected them in CATS. I've seen the show a few years ago at the QET where a cast of more than 20 occupied a huge stage. The Coast Capital Stage is a bit small for a full-blown production like this one, but despite the cramped situation, Mooney was able to break the fourth wall and get the actors in the aisles interacting with the audience. Sometimes it works, sometimes it doesn't, as some audience members feel uneasy when actors interact with them.

Naturally, the song that stood out in this musical was "Memory" which became a big hit because of singers like Barbra Streisand. Lisa Rickets (Grizabella) gave a passionate and powerful rendition of this song, and received a warm applause from the audience.

The show will continue in White Rock till February 7th and then will move to the Jericho Arts Centre for three weeks starting February 19th. It's a show worth seeing and you'll get your money's worth.