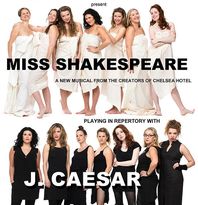 Power's adaptation of Shakespeare's Julius Caesar takes place in a dystopic future, around 300 years from now, where women control the world. The language spoken is still English, the original script of Shakespeare, in iambic pentameter. The original three-hour play with around 20 characters is reduced to 1.5 hr, with seven characters. But the adaptation works: the basic elements are there.

The cast of seven women (Caroline Cave, Medina Han, Amanda Lisman, Pippa Mackie, Susinn McFarlen, Erin Moon and Tracey Power) did a marvelous job on opening night. They connected well with each other; they were comfortable with their lines; and the pacing was close to perfect.

Director James McDonald who has directed 18 Shakesperean productions did a fabulous job with this play. You could hear a pin drop as the audience was totally engrossed in the show. The music and sound effects by Steve Charles fit the tragic ambience of this play, and the set/lighting design by Cory Sincennes was simple but effective.

Accolades to the cast and crew for an interesting sci-fi version of this Shakesperean classic.

Miss Shakespeare which made its world premiere in Vancouver should definitely tour all over Canada and the US, and make its debut in Off-Broadway. .From the standing ovation and reaction of audiences here, it's the kind of musical that will get rave reviews wherever it's presented. It's unique, original and has Broadway potential and calibre.

Based on a fictional narration about Shakespeare's youngest daughter, Judith (Susinn McFarlen/Amanda Lisman) who felt that women should not be excluded as thespians during the Elizabethan reign, this musical proves that indeed, women can be as good as men. The songs are original, although I did notice some influence from Chelsea Hotel, especially one of the songs, Leonard Cohen's "Suzanne".

It's amazing how talented these women are: from the dramatic rendition of J. Caesar, to the frivolous sauciness of Miss Shakespeare. Hats off to Director James McDonald, the actors and the music by Steve Charles who co-wrote the music and lyrics with Tracey Power.