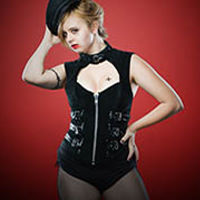 When you first walk into the Blueshore theatre at Capilano University, you are taken back by Carolyn Rapanos' breathtaking set of the Kit Kat Club where even the band has been prominently placed on a raiser in the middle.

Director Steven Atkins seems to take a Brechtian approach to the show which sometimes works and sometimes doesn't. In a bold effort to strip the stage free of hidden actors, the wing curtains were removed. To me, this was distracting watching actors offstage only to later enter and plant themselves onstage when the audience was still coming in.

Another strange choice was to isolate the audience by the use of a Demi Lavato song which played out at the end of the final scene of Act 1 and carried on through the blackout to intermission. If the intention was to disconnect me from the world of the show and make me aware that I was watching a play, then, job well done. These, fortunately, were my only dislikes of the entire night.

Jumping now right into the characters, the "Emcee" (Zachary Lamarche) does more than a fair job in his portrayal as a sexually ambiguous persona, as does his accent and a pleasant singing voice.

Colton Fyfe plays Cliff Bradshaw and he boasts a rich warm singing voice. However, I found I lost a little bit of the humour in his performance, and he was struggling a bit to settle into his character.

The ensemble of dancers worked hard under Keri Minty's jazz shoes. The choreography was fun and a great showcase for the young dancers who, according to Minty, were just sexy enough without being too showy.

And what review on Cabaret is complete without mentioning the leading lady herself, Miss Sally Bowles played by Jenna Testani. With so many iconic women playing her--Liza in the movie, Michele Williams and Emma Stone in recent revivals-- it’s hard not to fall into the trap of replicating them. But Testani embraces all the elements of those iconic women and amalgamates them into her own unique interpretation. She embraces these choices in using humour to cover her tragic situation. She indeed has a stunning singing voice. This young actress is destined for big things to come.

Other standouts include Ali Watson who plays Freau with a tough, but comically gold exterior; Kurtis D Oust as Kit Kat Dancer "Bobby" who is as flexible as he is sexually appealing to everyone; and Leah Newson who is just about as perfect of an ingénue as you can get.

The sound and lighting was also quite good and I've never had issues hearing actors (or being heard as an actor myself) at Exit 22 shows. Steven Greenfield does an excellent job conducting and playing the small but powerful band that is as good if not better than something you might hear at the Arts Club. Head over to North Vancouver and see Cabaret, you won’t be disappointed by these young emerging artists.