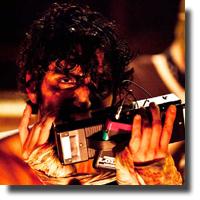 Coming all the way from Quebec City, L’orchestre d’hommes-orchestres (LODHO) didn’t travel light. The five men and three women brought enough conventional instruments to sustain a full-size orchestra, including a double bass that no one gets around to playing. LODHO also brought along a load of equipment that takes ‘home-made’ to a new level.

Some conventional instruments are played with an unconventional technique, such as a violin played like a slide guitar and playing the harmonica while being worn around a woman’s neck. Original creations adapted from classic household objects are operated (almost) according to manufacturers specifications, like the old gramophone that provides the show’s first distorted sound by playing a worn 78 rpm record.

So what defines Cabaret anyway? One might describe it as nightclub entertainment oriented towards adult audiences. LODHO may be closer to the German form of Kabarett – transgressive performance characterized by satire and gallows humor. LODHO certainly infringes on the standard notion of “good taste.” Their expression has few boundaries, indulging in music that cross-pollinates, comedy, circus, burlesque, live art, theatre and dance – all the while provoking as much as it pleases.

In Cabaret Brise-Jour, the band delivers their enigmatic interpretation of the music of Kurt Weill, the German composer who successfully collaborated with Bertolt Brecht, permeating the songs with modern musical models.

All the musicians are accomplished in multiple instruments, but none have especially euphonious voices. The probable exception is Danya Ortmann, whose quirky rendering of “The One Indispensible Man” from Weill’s Knickerbocker Holiday finally got me in the zone. Ms. Ortmann enchanted everyone with the show’s final song “Ballade de la Fille Noyée” (Ballad of a drowned girl) with solo accompaniment on the zither.

I was mildly disappointed with the omission of any songs from Weill’s most famous work, The Threepenny Opera, and since LODHO featured three songs from Aufstieg und Fall der Stadt Mahagonny (Rise and Fall of the City of Mahagonny), why not include one of the best - "Alabama Song"

The show is deliberately unstructured and spontaneously cacophonic. But that’s okay; it’s definitely for folks who like their theatre (and cabaret) bold, yet rough around the edges.