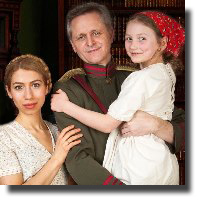 United Players
Burnt by the Sun by Peter Flannery

Set during Stalin’s Russian in 1936, at the summer home of highly esteemed General Kotov, Burnt by the Sun provides a disarming perspective of the bucolic cottage life of the Russian middle-class as it existed prior to the Revolution. Kotov is devoted to his wife, Maroussia, and to his spirited young daughter, Nadia. This devotion leads him to allow his in-laws and their friends to annually relive vestigial reveries of the old aristocratic class whose memories of their summer home are rich with pre-Revolution happiness. But the world is now very different, as Kotov so deliberately points out. More different than even he realizes until it is too late.

The tension between the reliving the vestiges of the past and following the hard line of the Communist Party lead to some intense moments, and there are several good examples of heated dialogue between the principal players of this noteworthy cast. If the first act is at times plodding, the second act more than makes up for it in terms of intense action and engaging dialogue.

The central conflict arises when Kotov’s wife, Maroussia, is surprised to find that her former lover, a musician named Mitia, has reappeared at their summer home. The rest of the play revolves around a power struggle between Mitia and Kotov for Maroussia’s affection. But although this passion is intense, there is much more at stake than the love of a woman.

Alexandra Lipskaia does an admirable job of conveying the throttled emotional intensity in her impressive portrayal of Maroussia. Thomas Saunders also acquits himself quite well as the beloved General Kotov. The always inimitable James Gill is a stand out as the university professor Vsevolod. The young Elyza Ryder does a great job as Nadia, the precocious young daughter of Maroussia and Kotov.

We were accompanied to the opening night performance by a young Russian friend of mine who has only recently immigrated to Canada, and she found herself moved to tears by this United Players Performance of Burnt by the Sun. It reminded her of her of some of her own parents experiences under the Stalin regime. They would have been close to Nadia’s age at the time the play was set. The dramatic tension of this play, with its passion and political intrigue, was particularly well-presented within the scope of the performance. This is yet another in a series of excellent plays in a memorable season at the United Players of Vancouver.