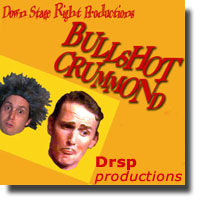 No one said parodies had to be sublime, but this mounting of Bullshot Crummond, an over-the-top spoof on the adventures of British spy-catcher, Bulldog Drummond is blatantly single-dimensional and an absolute triumph of low humour.

That said, an immensely talented cast led by Neil Minor in a brilliant madcap performance as the intrepid Captain Hugh “Bullshot” Crummond, bring a quality beyond what is typically befitting this genre.

The rest of the cast, including Lucy Paschall as Crummond's coquettish damsel-in-distress, Rosemary and Karen Davis, who is outrageously camp as the deliciously seductive Lenya wear their puerile absurdity like a badge of honour.

Down Stage Right Productions have combined the best from Maxwell Smart and the worst from Austin Powers in a bizarre Pythonesque format that pits a clueless agent (Crummond) against the ludicrously evil pair, Otto and Lenya Von Brunno (it was never obvious, as to whether they were husband and wife or brother and sister). Otto is totally inept as a German spy - he even wears a military uniform in the middle of the English countryside, but still hilariously out-manoeuvres Crummond at every turn.

Director, Mark Carter brings a comic freshness to every clichéd theatrical trick in the book and set designer/constructor, Lance Cardinal shows what can be done with a good supply of ply board, a screwdriver and a gunnysack of assorted screws in creating some deliberately corny stage effects.

At ninety-minutes duration, Bullshot Crummond is not a minute too short. Nonetheless, its lack of raunchy, adult humour probably makes it appropriate to bring the whole family along. The play continues until the 30th of March with tickets only $20 at the door.