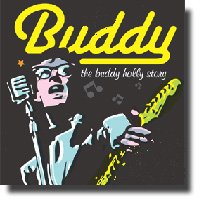 Charles Hardin Holley – who adopted his childhood nickname and dropped the ‘e’ from his last name to become Buddy Holly – wrote only a handful of songs, and yet fifty years after his tragic death he is still considered to be one of a few genuine pioneers who blazed a musical trail that left behind the scorched earth of Rock n’ Roll.

Outside the context of nostalgia concerts and biopics, songs like Maybe Baby, Peggy Sue and That’ll be the Day might today sound quaint. But with his trademark horn-rimmed glasses and neatly pressed suits, Holly was a true innovator. His four-piece lineup of drums, lead, bass, and rhythm guitars, considered radical then, was popularized in the sixties by a slew of British bands including The Beatles and The Hollies, who chose their name in honour of Holly himself.

Buddy: The Buddy Holly Story is essentially a feel-good, ‘juke-box’ musical that (justifiably) puts Holly’s musical catalogue squarely at the centre of the show with little emphasis on a storyline. It chronicles his meteoric rise of small town Texan to international artist over a couple of short years.

Writers Alan Janes and Rob Bettinson indeed play fast and loose with the events. Audiences may be led to believe (without looking at the Arts Club programme) that Holly wrote most of those songs single-handedly. Hardly true; for instance, the ironically titled It Doesn’t Matter Anymore, performed in the concert gig scene at the end of the second act, released posthumously a few weeks after his death was composed by Paul Anka. Adversely, the recording session scene in the first act where we see how Holly and his producer Norman Petty develop the song Everyday with Petty's wife helping out on the celeste (a keyboard instrument with a range of middle C and higher) is likely factual.

As Buddy Holly, Zachary Stevenson is outstanding performing Holly's material and pretty much carries the entire show. To his credit he doesn’t attempt to mimic the legendary performer, but rather updates the classic rock tunes. He even manages to get across to the audience the singer’s stubborn passion.

The roles of Holly’s collaborator Norman Petty (Milo Shandel) and his wife Maria-Elena Holly played by Elena Juatco (I’m sure their common given names is a coincidence) are markedly underwritten. Juatco actually has more to do in her secondary role as one third of a backing vocal trio. Jeff Bryant is stellar on lead guitar; both as one of the Crickets in the first act and then as Tommy (Allsup), a member of Holly’s new back-up band. Popular local artists Denis Simpson and Sibel Thrasher provide the audience with a surprise treat with a warm-up act at the Harlem Apollo. Simpson’s doo-wop version of Why do fools Fall in Love half-way through the second act however, is really just filler.

Much of the production depends on the entertainment value of the concert gigs that climax both acts. In this area it certainly doesn’t disappoint. The final scene which replicates the ill–starred Winter Party concert at Clear Lake, Iowa is, without doubt, the show’s high point. It features an awesome performance of Chantilly Lace by Kieran Martin Murphy in his role of J.P. Richardson (The Big Bopper) as well as an absurdly outrageous performance by Michael Scholar Jr, who is allowed too much fun as Ritchie Valens.

Buddy Holly's untimely death on the 3rd February 1959 marked not only “the day the music died,” but the end of a romantic pioneering era. His many pretenders have since come and gone but truly ground-breaking artists have been few and far between.