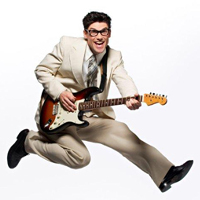 Including an Interview with Elena Juatco

Buddy: The Buddy Holly Story is essentially a ‘juke-box’ stage musical that puts Holly’s musical catalogue squarely at the centre of the show. The lightweight storyline chronicles the artist’s anomalous career as a country singer from a Lubbock, Texas to an international Rock ‘n Roll innovator over a couple of short years.

As Buddy Holly, Zachary Stevenson is outstanding performing Holly's material and effectively carries much of the show on his own slim shoulders. To his credit though,he doesn’t try to mimic Holly, but rather updates those iconic rock tunes. During the show’s few dramatic scenes, Stevenson even manages to get across to the audience the legendary performer’s drive and passion.

Alan Janes’ story begins at the KDAV Sunday Party radio show, when Buddy and his Crickets shock the redneck listeners and his own manager with a wild rendition of Ready Teddy. Holly’s recording career, however, is set in motion a couple of scenes later. After his rejection at Decca, he goes to Norman Petty’s studio in Clovis, New Mexico. Petty’s studio scene was perhaps only interesting, in as much, that it showed the development of some of the Crickets’ earlier songs. Particularly, with the song Everyday, with Petty's wife constructing the intro on the celeste. Knowing that Vi Petty was a musician in her own right, the incident was likely factual.

Much of the production’s success relies on the entertainment value of the concert gigs that climax each of the two acts and in this area, the show certainly doesn’t disappoint. The first played at the Apollo Theatre, where much was made of the Crickets, a white band, playing in Harlem. The audience even bought into the joke with some good-humoured jeering. The final scene, which replicated the ill–starred Winter Party concert at Clear Lake, Iowa, was, without doubt, the show’s high point. The entire cast plus side musicians, led by Zachary Stevenson, perform such classic songs as La Bamba, Chantilly Lace, and Rave On!

The role of Holly’s musical collaborator Norman Petty (Mark Burgess) is patently underwritten and so too, though to a lesser extent is the role of Maria-Elena Holly (Elena Juatco). Juatco actually had more to do in a pair of secondary roles as one third of a backing vocal trio and as a jingle singer on KDAV. Some inspired casting brought three solid actor/musicians to the production, who more than hold their own as the Crickets: Jeremy Holmes as bass-player Joe (Mauldin), Scott Carmichael as drummer Jerry (Allison) and Jeff Bryant as Guitarist Tommy (Allsup).

Popular local artist Sibel Thrasher gave the audience a special treat with a warm-up act at Harlem’s Apollo Theatre. Tom Pickett, who inherited the role of Apollo’s MC from the late Denis Simpson, showed that he has a penchant for comedy as well as serious drama. Mr. Simpson sadly passed away just a few months after the show’s original run, a couple of weeks before his sixtieth birthday.

Holly and his Crickets were, of course, extremely popular in the US, but in England, even more so. This was due, at least in part, to them having toured England. Also, the fact that he wore his glasses on stage likely endeared him to his British fans; a style that was propagated twenty years later by Elvis Costello.

Buddy Holly's tragic and untimely death on February 3rd 1959 perhaps did mark the end of a romantic pioneering era in popular music, but surely in contradiction to Don McLean’s symbolic lyrics (American Pie) it wasn’t “the day the music died.”

An Interview with Elena Juatco

This month, the Arts Club will be remounting Buddy: The Buddy Holly Story. Vancouver’s auspicious theatre company has decided ‘not to mess with success’ and are essentially keeping faith with the same cast and crew as the 2010 production. That’s good news! It means we’ll get to see Vancouver born (and now) Toronto based Elena Juatco reprise the role of her namesake, Maria Elena Holly.

I recently talked with the Philippine-Canadian actor about being part of this stage musical and her portrayal of Buddy Holly’s widow, who is still alive at age seventy-six. She seemed to be as exuberant as though it was a fresh challenge and credited her fellow cast members for maintaining a great energy level as well as heaping praise on Zachary Stevenson, who looks and sounds exactly like the legendary Holly.

Most of us were introduced to Elena Juatco as an eighteen-year-old contestant on the second season of Canadian Idol. Though eliminated at the “final six” stage, she recalls her stint on the show as a positive experience. “Canadian Idol was very good to me, I was invited back as a roving reporter for Season 4.”

What happened after her CTV assignment? “I decided to return to Queen’s University and complete my B.A.” “I majored in Drama and minored in Women's Studies,” she declared proudly. When I asked which other accomplishments she was particularly proud of, she was unhesitant. “I was really proud to receive a Jessie award for playing Christine Colgate in Dirty Rotten Scoundrels at the Vancouver Playhouse. It was my first lead role and back in my home town.”

I mentioned that the last time I saw her was in the Fringe Festival here in Vancouver in September, last year where she gave a monologue performance in Dianne and Me. She was so convincing that I had to ask if she had any part in writing it. “It was written by Ron Fromstein. It’s been developed further and we presented it in Stratford this Spring.”

When I asked if there were roles she might want to do in the future, she thought about it for a moment, then gave me an extensive list. “I’d like to play Elphaba (the green witch) in Wicked. I’ve already played Kim in Miss Saigon but would love to do it again, also Mimi in Rent and I wouldn’t turn down a chance to be in Glee (the TV show).”

While has she been concentrating principally on her acting career, she hasn’t forgotten her musical roots. She is an accomplished pianist and also plays the guitar. While on tour with the Buddy show, she found time to pick up the mandolin.

When I asked her if there was anyone that had given her special inspiration, her answer suprised me - though, perhaps it shouldn't have. "My brother, Jay Leonard Juatco" she declared, almost matter-of-fact.

Look out for Elena on television in the Fall, when she appears on an episode of HBO’s The Transporter Series, a television version of the Jason Statham Transporter movie franchise.