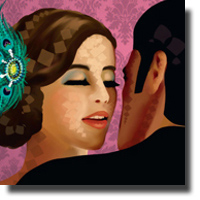 The musical stars Polly (Julia Ullrich) who is studying at Mlle Dubonnet(Rose McNeil) Finishing School in Nice, France. The Villa Caprice is a basic bright set that compliments the costumes well. Polly is paired with a gaggle of girls who dream to be taken to the ball with their hopeful boyfriends. Nancy (Linsday Warnock) is paired with Pierre (Justin Lapena), Fay (Cassandra Piovesan) with Marcel (Theo Budd), Dulcie (Saige Woolley) with Alphonese (Oliver Castillo) and Maisie (Cassady Ranford) with the all-American Bobby (Dustin Hovey).

The scene opens with Polly musing over a letter from her (imaginary) boyfriend in Paris to the other girls from the school. In truth, she is sending the letters to herself as her father, Percival Browne, (Sky Kao) will not allow her to date for risk of stealing her fortune. The girls are all in navy cardigans, grey skirts and scarves with white blouses and all hold their own in terms of dance footwork and stage movement.

Monsieur Browne enters looking for his daughter, only to run into the headmistress of the school; the two reconnect and realise they are each other’s old flame during the war. Sky is reserved and neutral in his role, not swayed by Mlle Dubonnet’s seduction attempts. Polly enters and meets Tony (Boris Zugic), who is dressed as a messenger boy with a package for Polly. After a great musical number with contemporary Charleston moves, the two agree to attend the ball together. Polly is aware that her father would disapprove of her liking someone of lower financial status than her.

There is a lot of dancing in the play and at one point there is tap dancing. Some of the cast members use character shoes which don’t foster a strong and consistent technique. The weakest number is, “Safety in Numbers”, sung by Masie, as her voice has more volume then song. Later that evening, the ball has started and all of the prospective pairs are in complimentary pair costumes.

A lot of dancing and socializing amongst the girls and Polly is left wondering what to do without her beau and her father’s disapproval. Tony enters, only to reconnect with his parents, and admits to Polly, that he is from a wealthy family. The two happily agree to engage. Much to our surprise, all the other girls have been proposed to by their beaus, and all happily accept at midnight. Even Percival and Mlle Dubonnet have agreed to rekindle their flame in matrimony! Lord and Lady Brockhurst are reunited with their son and all is well.