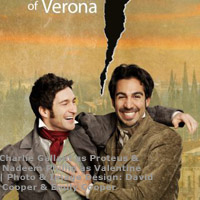 Bard on the Beach
The Two Gentlemen of Verona

Its a full house at the opening night of The Two Gentlemen of Verona. Its a wonderful performance. We are spending a perfect summer evening in a tent at the beach for one of Shakespeares great comedies.

The Two Gentlemen of Verona is about two best friends, Valentine (Nadeem Philip) and Proteus(Charlie Gallant) who are both in love with Sylvia (Adele Noronha), another mans girlfriend. The other man is Turio (Kamyar Pazandeh), a wealthy nobleman. Sylvias father, (the Duke, Edward Foy) wants her to marry Turio. This love Proteus has for Sylvia will cause a double problem for him since he already has a girlfriend, Julia (Kate Besworth). Although Proteus leaves Julia behind, Julia decides to follow Proteus to the Dukes residence without Proteuss knowledge...and so the plot thickens.

The costume designs (Mara Gottler) are perfect for this period stage performance. The costumes are colourful and elegant. Its great to see some effort in costume design. The play is well directed. The actors performance is flawless and the physical agility of the actors is impressive. I loved the fun choreography (Tara Cheyenne Friedenberg).

At the beginning of the play we had trouble hearing the dialogue. It greatly improved however as the play rolled along. Proteuss servant Launce (Andrew Cownden) shows up on occasion with his dog, Crab, a basset hound with big brown eyes that captivates the audience.

Valentines servant, Chirag Naiks (Speed) acting stands out because he is so animated and he adds a really funny and uplifting character to the story. I am also impressed with the three rogues in the forest. I just loved that particular part of the performance. The three are hilarious. The fencing between the nobleman Turio and the Duke is also quite well done. It isnt often that one can see swords in action in a live performance.

The acting was fabulous. The lines flowed. The tremendous work and time that went into their rehearsals is evident. Those hours of dedication made this opening nights performance a success.

I am actually amazed at how comfortable the seats are. I did not expect such luxury in a tent and I can tell you it is most appreciated. So now with your fear of comfort in a tent solved, go down to the beach on a warm summer night and enjoy this uplifting performance