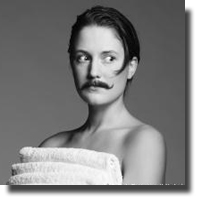 Bard on the Beach’s Twelfth Night takes place at a summery, elegant seaside hotel and spa sometime early in the last century. Opting for a second-scene-start, director Dennis Garnhum initiates a narrative interlude that allows all of the principal actors to share the stage in mimed action, while the Sea Captain (Duncan Fraser) and Viola (Rachel Cairns) introduce the audience to the central theme of an impossible courtship between Duke Orsino (Todd Thomson) and Olivia (Jennifer Lines), the wealthy owner of the hotel, along with the complicating device of Viola as Cesario— the lead’s assumed identity.

Rachel Cairns brings so high a degree of sensitivity and such depth of character to her role as Viola that her wooing of Olivia on behalf of Orsino moves from inventively plausible to intellectually passionate, and ramps up to nothing short of artistically astounding. She is not only utterly believable in her role within a role, she is so consummate that it is easy to see why Jennifer Lines’s Olivia cannot help but become smitten by her youthful ebullience.

Ms. Lines’s performance runs true to the form of her character: initially, cold and mournful – a dame in a dirge – then, sparked by the ardour of Viola as Cesario wooing for Orsino, moonstruck as a school-girl lost in the throes of unrequited love.

Refreshingly enough, none of the characters in this year’s Twelfth Night devolve into caricatures of themselves. Even Allan Zinyk’s Malvolio, traditionally underplayed to elicit some ambivalence or sympathy, ranges from whole-heartedly obsequious to prissily prudish; then, once baited with the lure of impossible love, the hilarious intensity of full on gullible, bearing in his fleshed-out performance the marks of a true mark.

Todd Thomson plays his Orsino in earnest, implacable zeal. He tempers his quest for the impossible and unattainable with an alacrity that is as effortless as it is sincerely misguided. There is a clean, crispness about his role, an ardent integrity that makes the audience smile happily when, in the end, he gets his ‘man’.

Bill Dow plays false to perfection as the noble drunkard of a trickster Toby Belch. Mr. Dow does an admirable job of portraying several sides of his colourful character, including ribald, lecherous and loquaciously lewd. He and his gull of a sidekick, Sir Anthony Aguecheek (Richard Newman) provide much of the comic relief in a play that is two thirds hilarity, one third high romance.

Whether singing, waxing witty with the wisecracks or practicing pretense as the voluble Sir Topaz intent on exorcising evil from Malvolio, Jonathon Young proves his performance noteworthy again and again as the impish fool Feste.

Twelfth Night delivers on dazzle, romantic entanglements, comic timing, and heartfelt depth in a play that turns on its lively turns, from the cheeky, towel-snapping frivolity of the sauna scene to the old-fashioned madcap bathing suit beach scene. There are both superficialities and rare relevancies, in this thoroughly engaging play. It is certain after having enjoyed this version of Twelfth Night that the Bard himself would heartily approve of everything from the fine acting to Nancy Bryant’s impressive costumes; from Gerald King’s sensitively-hued lighting design to Pam Johnson’s brightly conceived sets.