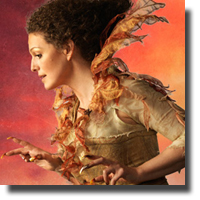 On Friday evening I made my way through downtown Vancouver to the iconic white tents of Bard on the Beach. It was opening night of The Tempest, an enchanting tale of love and justice often thought to have been Shakespeare’s last solo work. The play is written in real time, and combines a simple plot with a captivating company of characters. With the support of a string quartet and accomplished cast, Bard on the Beach brings to life the interesting mix of comedy, romance, magic, and tragedy that defines this play.

The Tempest begins in the midst of a violent sea storm off the coast of an unknown island. A royal ship, caught in the onslaught of relentless waves, is ravaged and wrecked, casting its inhabitants out to sea. This first tragic scene transitions seamlessly to the introduction of Miranda (Lili Beaudoin) and her father, Prospero (Allan Morgan). We soon learn that Prospero, a rightful Duke and aggrieved magician, had not only concocted the tempest, but had purposely targeted the party aboard in order to exact revenge.

With the assistance of his enslaved spirit Ariel (Jennifer Lines), Prospero ensures that the shipwrecked party makes it safely, if not separated, to his island. Though the magician pulls the strings in this play, the talented on-stage musicians, along with Ariel and her sprites, seem to guide the tale. The music adds tone and effect, drawing the audience in and directing their attention, while Ariel becomes an ever-present fixture, carrying out orders and observing all that occurs.

There are three main subplots to this play: the love of Miranda and Prince Ferdinand (Daniel Doheny), the mourning king with his murderous escort, and the drunken ladies and their vengeful monster. Of these, the first is the most innocent and perhaps least exciting, though Beaudoin and Doheny do a lovely job of portraying the whimsical lust and adoration of young love. Interestingly, in Shakespeare’s original play, the drunken ladies were actually written as men, making Miranda the sole female in the play (a sore point for some). Director Meg Roe, however, opted to transform the characters in to Stephana (Naomi Wright) and Trincula (Luisa Jojic), a couple of boisterous, bawdy and hilarious ladies of court.

The second act sees the coming together of all characters and plots. It begins with Lines’ impressive performance as a larger than life winged beast, followed by Prospero’s famous soliloquy on the mortality of man and the dreamlike quality of art and life. The play ends with Prospero’s turn of heart, allowing all tragedy to be averted and happiness to ensue.

While each character in this play is thoughtfully portrayed, it is Ariel and the two ladies of court that steal the show. Lines fully embodies the character of Ariel, taking meticulous pains with everything from her restless posture and twitching fingers to her emotional development from frightened spirit to commanding presence. Wright and Jojic are simply entertaining to watch. The shenanigans of these ladies, augmented by their fantastic physical comedy, lively facial expressions, and on-stage chemistry are a clear highlight of the performance.

Unlike other Shakespearean plays, the structure of The Tempest allows for minimal set changes and linear transitions. It is easy to follow, enjoyable to watch, and includes little overt violence, making it an appropriate show for all ages. Bard on the Beach, a summer staple for many Vancouverites, delivers yet another timeless tale with The Tempest in their own unique and entertaining way.

This year’s Bard on the Beach production of The Tempest makes vivid reality out of “such stuff as dreams are made on,” and by the time the revels are ended, you’ll wish director Meg Roe’s fabulous re-creation was opening with the first act once again. If this play were a song, it would be Whitney Houston singing the hell out of all the high notes in “I Will Always Love You.” That one always gives me what J-Lo calls the “Goosies” when she’s judging a particularly awesome singer on American Idol. After Allan Morgan’s sexy and robust Prospero gives Jennifer Lines, manically attentive Ariel her freedom near the end of the play, the consummate string-quartet accompaniment augments Ms. Lines’ stellar scene-stealer of a performance until her high notes subside while she sings of where she “shall live now under the blossom that hangs on the bough.” Like that blossom, her audience were hanging on her every sustained note, and the stage was set for her bittersweet final departure from the play.

Yet for one frenetic instant, she lingered, holding Prospero in her ardent gaze before her light foot tripped gaily into the wings. Here was the crowning image for this wonderful play frozen forever in my mind’s eye: devotion personified in the form of this light-winged dryad, cherishing a last glance at her master, eternally grateful for freedom freely given by him in exchange for years of dedicated service. If there is a visual metaphor for Ms. Roe’s 2014 re-creation of The Tempest, this surely must be the one that Lines and Morgan bring most memorably and lovingly to life.

It is not just that this year’s Tempest does more with the romance and the frivolous farce than the previous incarnation, it is also that this production does it with unequivocal visual appeal and mesmerizing Christine Reimer costumes—and through the unique synergy that comes when these two components unite.

From their initial encounter to their magical marriage ceremony, the handsomeness of Daniel Doheny’s Disney-style prince Ferdinand couples exquisite costuming with unassailable charisma, while Lili Beaudoin’s Miranda wears her stunning beauty as openly and freely as her artfully created attire. If it seems that their romantic entanglement is ancillary to the central plot, the legacy for ongoing unity between post-Antonio Milan and Naples can only be enhanced by the marriage between Prospero’s daughter and King Alonso’s son. The more we know of the plot, the more we root for the rightful duke of Milan and appreciate his master plan.

Steadily more dishevelled, and exponentially more hilarious, as the play progresses, is my impression of Luisa Jojic’s Trincula and Naomi Wright’s Stephana: these two become enmeshed with a revolutionary plot concocted by Todd Tomson’s intensely physical Caliban. Who knew so ignoble a savage could have such a captivatingly compelling foot fetish! Good choice to cut all his exit lines, Ms. Roe: ‘twere best he remain unrepentantly incommunicado (the foot-in-mouth innuendo is also a droll touch).

Everyone from the sprites of the island to the mariners, the King of Naples and the rest of the aristocracy are brilliantly attired, and as in costume so in characterization this year’s Tempest dazzles and does not dismay. The opening scene goes so far to making dry land seem like a ship being wrecked at sea that you could be forgiven if you began to feel a little sea-sick yourself. Me? I just wish we were all feeling like we were at sea again starting over in act one. If you see The Tempest, you’re sure to feel it, too.