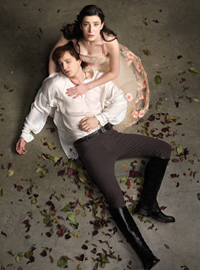 Romeo and Juliet by William Shakespeare

This past Friday, Bard on the Beach celebrated the launch of their 27th season with Shakespeare’s most beloved and timeless tragedy, Romeo and Juliet. Media, sponsors, supporters, and friends alike gathered for the occasion, creating a sense of joyous comradery under the big white tents of Vanier Park.

In festival tradition, Artistic Director Christopher Gaze took the stage as the audience settled in, making sure to thank sponsors and mention the Bard Education program before launching in to the opening lines of Romeo and Juliet. With seamless transition the actors took over, engaging their audience in a heated duel on the streets of Verona.

While the talented Andrew McNee (Mercutio) stole each scene he strolled in to, Andrew Chown and Hailey Gillis did a magnificent job of capturing the innocence and devastation of Romeo and Juliet. One of my favourite scenes of the production was their wedding; pure and unburdened, the couple rejoice in their love with childlike play and enthusiasm—a feeling only tempered by the telling moment when the two are forced to part, bringing Act 1 to a close.

The cast and crew did a wonderful job at portraying the heart of this tragedy; the intent behind each scene was delivered on point, bringing to life the meaning behind the words. The second act commenced with a much darker tone, as is to be expected given the tragic turn the tale must take. Tybalt, portrayed by Anton Lipovetsky, challenges Romeo to a duel, marking a clear and fatal turning point with Mercutio’s demise and the banishment of Romeo.

Perhaps the best known of Shakespeare’s plays, everyone knows what happens to our star-crossed lovers. As such, it never ceases to amaze how we root for the outcome to change. As Romeo battles with heartbreak, we can’t help our hope that Friar Laurence (powerfully performed by Scott Bellis), will catch Romeo before he makes his mortal mistake.

I won’t give away the end, but suffice it to say that—in testament to the cast and crew—there were a few teary eyes spotted as I joined the audience in a well-deserved standing ovation.

The arguable beauty of any Shakespearean play is the inherent versatility it allows, and Romeo and Juliet is no exception. While Bard on the Beach is famed for staying true to the tongue-twisting vernacular of Shakespeare, the festival is also known for adding its own flare to each production. Without giving it away, the show presents an inspired, and at times surprising, combination of modernity and tradition.

As usual, I very much enjoyed myself on this opening night of Bard on the Beach—like many others, I had been waiting years for Romeo and Juliet to come back to the festival, and I must say that the performance did not disappoint. Well done!